This page details prerelease information and/or media for Theme Hospital.

Theme Hospital underwent numerous changes during its development, most notably the change of focus from a real hospital to comical ailments, and the dropping of the planned different time periods the game would have been set in. The game's release date was also pushed back multiple times.

There was difficulty in basing the game on real hospitals because the developers knew that theme parks are naturally much more colourful and fun than hospitals.[1] After hospital visits, this idea was dropped and the game shifted to using comical ailments instead.[1][2][3]

A promotional trailer for Bullfrog games purportedly from 1996 includes brief glimpses of the very earliest build of the game. This shows a doctor doing his rounds in a ward, and bringing up a cut chart for each patient at their bed.

The game was shown in a Bullfrog Progress report, and featured the adviser from Theme Park. Much progress had been made on the artificial intelligence.

A trailer advertised the intended four time periods, and showed other stuff not in the final game, and claimed a release date of Spring 1996 (May 1996, according to Bullfrog as of late 1995/early 1996[7]).

A 1995 promotional release showed the game with doctors, floor designs, and other things not seen in the final game.[8] 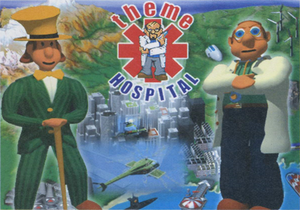 Some magazines, including Génération 4 and Bullfrog's own publication Bullfrog Bulletin, were showing promotional images with the Theme Park adviser.[9][10] The third issue of Bullfrog Bulletin claimed a Summer 1996 release date.[11]

The game was originally to have four time zones: modern, mediaeval, futuristic, and Victorian.[2][3] The intention was for the player to begin in the mediaeval zone and progress through them.[12] By May 1996, this had turned out to be "prohibitive" because of the number of graphics required.[4] PC Zone speculated that this feature would come in an add-on disc or sequel.[4]

A non-playable 1996 demo demonstrated game editors and other stuff not in the final game. The date and balance are at the top-left corner of the screen.

An official "Theme Hospital Diary" was written by Bullfrog's Mark Webley for the UK GamesMaster magazine in late 1996. Running for only 3 issues (45-47), the articles are not very illuminating, but the final instalment does briefly discuss the cut alien invasion event that seemingly only remains as unused receptionist announcements in the final game:

"The team want aliens now. Fleets of nasties to destroy, maim and pass around nasty rashes to the population. But surely introducing aliens to the game is overkill? No actually, if your hospital is running well enough there's no reason why you wouldn't be able to cope with an alien invasion."[13] 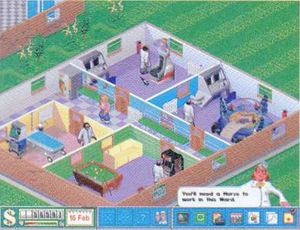 A near-final (February 1997) screenshot. There are still some minor differences such as the icon above patients' heads. (Source: Génération 4 February 1997 page 60)

Preview screens from magazines show numerous differences between development versions and the final:

A trailer for the game claimed a release date of December 1996, and showed a helicopter exploding.

Found on the internet is a "preview" archive of official Bullfrog screenshots of their games in development in 1995/96, including Dungeon Keeper, Theme Hospital, Syndicate Wars, Creation, and others. These early screenshots were printed in all the videogame magazines at the time, and seem to be the original source of many of the images above. These pictures show the game in many different stages of development, including what are clearly extremely early versions of the game. The archive consists of a directory full of these images in various formats for each game, and a second "catalog" DOS executable that contains more images and basic explanatory text.

This is a DOS executable called "View" that is some kind of generic interactive manual viewer created by Bullfrog. This program contains a short brochure of further images and information on Bullfrog's games from the era, including three very early images of Theme Hospital. Unfortunately the raw pictures inside the .dat files have the menu buttons actually written onto the image itself, they are not an overlay that can be removed.

A handful of images showing characters and logos from the Press Pack. Presumably the Theme Park branding angle was going to be pushed harder at one point, as evidenced by the Advisor dressed in his original costume in the rolling demo files.

These images all show a build of the game with an early UI design based around notes pinned to a cork board.

These images all show a build of the game with a UI design based around circular icons. That there's now a balance counter and calendar at the bottom left of the screen much like the final game suggests this was a later iteration.

A pair of screenshots of the low resolution mode of a near-final build. The interface is now very close to the final build, only the balance counter doesn't seem to be working and the calendar uses a seemingly placeholder font (and both images show the date as "may88"). Also of note is these are the first screenshots in the pack to show the KitKat branded vending machines from the final game instead of only the early generic "soft drinks" ones (which are still visible in both screenshots as well). The Town Map icon also looks different to the final game.

It's not clear if these are from the same build as the previous two images or not, but they are numbered sequentially with them, so presumably were. Very close to final, with just some minor UI changes.

Retrieved from "https://tcrf.net/index.php?title=Prerelease:Theme_Hospital&oldid=1219182"
Categories:
Cleanup > To do
Games > Games by content > Prereleases