Toki Tori was originally going to be named Eggbert. However, Two Tribes had to change the name when Capcom, their publisher, informed them that the name conflicted with Speedy Eggbert. Afterwards, Two Tribes came up many new names for the character, including EggHunt, Kiroi Tori, Jegg, and Toki Tori. Capcom liked Toki Tori the most, and thus it was chosen.

The Two Tribes screen was originally different, featuring spermatozoids. Since Two Tribes was planning on releasing the game in the US, they changed their logo to be more child-friendly.

The title screen when the game was called Eggbert. In addition to the different name, the prerelease title screen has rougher shading around the characters.

Concept art of Toki Tori using the Freeze-o-matic somewhere near Creepy Castle. This was one of the first sketches for the game's box art. 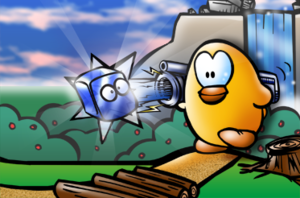 A colored version of the previous art with the major difference being that Toki Tori is in Forest Falls. This was a strong candidate for the game's box art before the final was chosen.