Ultima IX: Ascension was meant to address several of the issues Ultima VIII: Pagan suffered and to conclude the Avatar Chronicles in a better way. However, a hasty change to a 3D engine meant the game had to be reworked from scratch in about a year and a half and resulted in a heavily rushed game that had higher system requirements than most players had or could afford. Due to low sales, the Ultima series was put on an indefinite hiatus.

After the disappointing performance of Ultima VIII and its own rushed development, Richard Garriott started taking feedback from upset players. While work seemed to be progressing normally, there was another team that was dealing with Ultima Online on the side. However, Ultima Online became a surprise hit during its beta phase and Electronic Arts moved most of the development team to work on that game.

Throughout 1997 and 1998, several developers left Origin, including several key people working on Ultima IX due to intensive management demands. Many Westwood Studios alumni were then sent in to help salvage the project. Garriott was forced to take charge of the game's development, but was more occupied with company policy issues than with the game. Electronic Arts were appalled at the game's very incomplete state in late 1998 and nearly cancelled the game. They relented, but ultimately forced the team to release the game by Black Friday 1999 and on a lower budget, resulting in a very buggy game. Garriott and Seth Mendelsohn had to reduce the plot dramatically in order to get the game shipped. This was to give higher priority to Ultima Online 2, which ended up being cancelled in order to prevent competing with Ultima Online while it was still very popular.

The game was rewritten several times, with loads of plot details being changed.

The game would have originally started off after Pagan, where the player travels through the Guardian's homeworld. The Guardian was supposed to be a result of the three Shadowlord combining into one, instead of being the Avatar's evil counterpart. Not much else is known about the plot, as it was scrapped in response to fans wanting the game to return to gameplay closer to that of its predecessors. 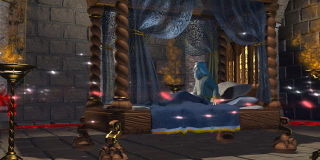 When the game starts, the Avatar is healing from his burns with Hawkwind by his side, then Hawkwind would have guided the character creation process. Like the final game, large columns would have appeared, which are an ominous sign. A plague also has spread among Britannia's citizens.

Meanwhile, Lord British has some nightmares, including one where the Avatar summons Pyros.

As many of the cinematics were rendered during this point of development and considering how expensive it was to render these, a lot of the plot of the final game had to rely on what these pre-rendered scenes had.

The game ended with the Avatar sacrificing himself to protect Britannia from the Guardian.

There were plans to bring back a party mechanic, but engine limitations and time constraints prevented these from being in the final product. In the final game, Wyrmguard armor can be worn without consequences, whereas the plan was to have NPCs like Lord British react to the Avatar wearing these negatively.

Originally, Ultima IX would have used the same engine as Pagan, thus using an isometric perspective. However, a new isometric 3D engine was created in 1995 after a few months of development. The camera would be able to move around, but the game used parallel projection to prevent excessive computational power. By 1997, the engine only had software acceleration, thus meaning the team added hardware acceleration for 3dfx cards. However, Origin's management demanded the game be fully 3D in order to be on the cutting edge. The team was very unprepared for ATI and NVidia cards rapidly overtaking the graphics card market in 1999.

As a result of the constantly changing plot, cutscenes that had already been rendered were hastily redone and/or edited in order to fit within the final game's context. 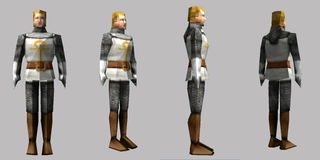 Some renders for the Avatar's first model. This was used while the game had a bird's-eye isometric perspective.