This page details prerelease information and/or media for Undertale.

Undertale was obliquely teased as "Underbound 2" in February 2013 before being released as an official demo of Undertale that May. It then recieved a Kickstarter page, where backers originally kept track of the game's progress before the eventual release in 2015. Judging from the developmental process, the foundation for the game was pretty much laid out save for a few minor layout changes and redone graphics.

Ever since the game's release, it had gained an immense following over the years which allowed Toby Fox to include new additions via updates and develop another game in the series called Deltarune.

In December 2012, Toby Fox started to develop Undertale after he clicked on a random article on Wikipedia and ended up on a page about arrays. Back then, he studied about basic programming variables in RPG Maker 2000 by reading books, but he did not know how to code a full-scale game. The game's original idea, dating back to early 2012, ended up being released in 2018 as Deltarune.

He stated in a 2017 Famitsu interview that the "Action" and "Quit" commands were inspired by Shin Megami Tensei, in a similar vein to interacting with monsters. Toby also claimed that Shin Megami Tensei was his inspiration for adding pacifism to Undertale, during a 2020 interview with NPR.

In the same NPR interview, Toby spoke of an early version of the first boss, in which the player would need to kill Toriel in order to progress. This was changed because according to Toby, "I was like, 'this sucks' and I changed it before I released the demo." 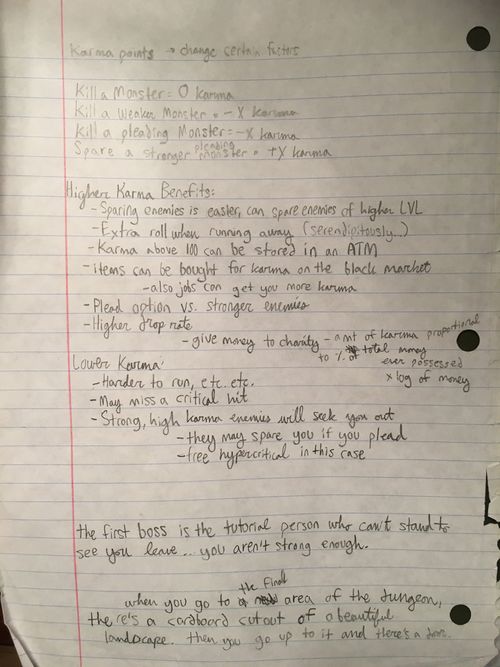 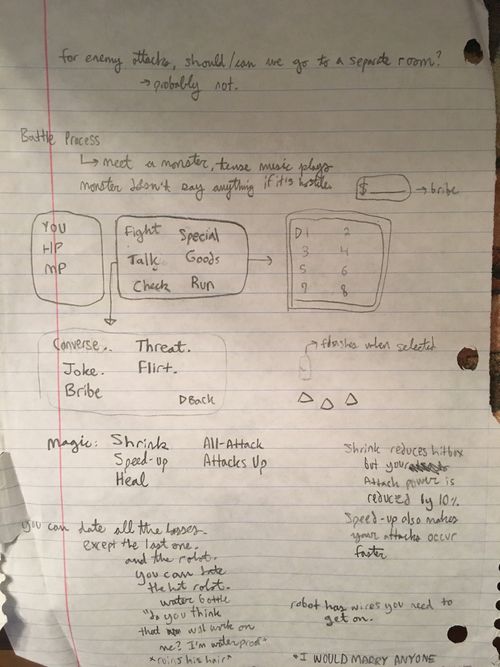 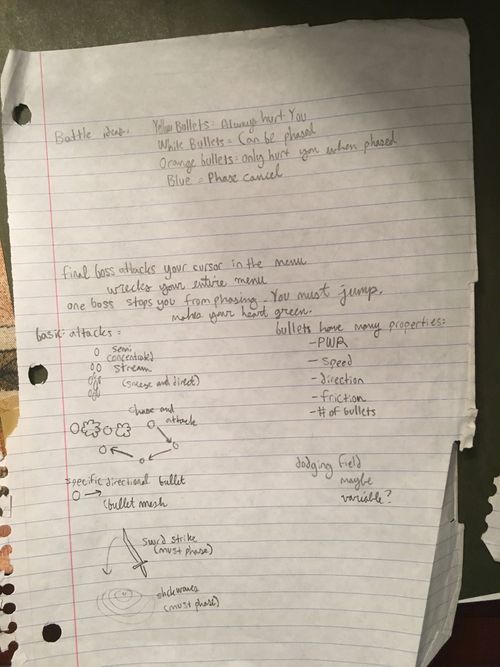 The first page posted on Toby's Twitter details a Karma system that never made it into the final game. The only concept related to Karma that did was the KR system in Sans's boss fight. The Karma system could have been reworked into the EXP system in the final game, giving you a certain amount of EXP when you kill monsters.

The second page details a few game mechanics along with dating bosses. In the final game, you can date pretty much all the bosses, except for Mettaton ("the hot robot") and Asgore ("the last one").

The UI design was shown in the Undertale Art Book.

The final page references a green heart attack, used by Undyne instead of Asgore ("final boss") in the final game. The sword attack was used by Asgore. Sans is the only boss that actively attacks your cursor, and he is the final boss of the No Mercy route, so this still stays true.

This page also details a phasing mechanic where you can phase through bullets. This never made it into the final game, but the final game allows the player to phase through cyan bullets by standing still and orange bullets by moving around when they make contact. Yellow bullets never made it into the final game, but every other type did. An early idea for the platforming-based Blue SOUL mechanic is already detailed here, but it's tied to whether or not the player can phase rather than whether or not they're affected by gravity.

The Kickstarter for the game originally hinted at the ability to date Mettaton, which never happens in the final game. However, Toby Fox did indeed write dialogue for the event, which was done so early into development that Mettaton wasn't even called Mettaton, instead going by "Memmaton." Presumably, "Memmaton" wouldn't have actually played a Ricky Martin MIDI if this scenario made it to the final game.

On February 4, 2013, Toby posted a joke reply in a friend's forum thread on Starmen.net, in which he claimed to be working on a sequel to the (likely also a joke) EarthBound hack "UnderBound", titled "UnderBound 2". The images and music shown were in reality from an early version of Undertale, and feature several differences from their final versions. 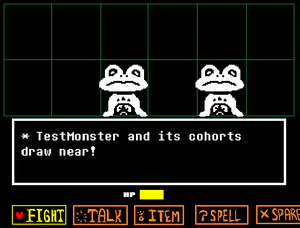 This image shows the earliest revealed screenshot of the game. While most of it looks similar to how the final game looks, the options at the bottom are different, with a "Talk" choice instead of "Act", "Spare" instead of "Mercy", and a "Spell" option that's not in the final (its graphics are present but unused, however). No visible LV meter has been implemented. The Froggit enemies are called "TestMonster", and the spots on its chest are slightly different than the final's.

Frisk originally had black outlines and darker hair and shoes. This was changed to a lighter brown in the demo, and in the final.

The regular battle theme, "Enemy Approaching", was one of the earliest tracks written for the game. The version from the PK Hack thread is slightly incomplete, notably missing the outro the final has and the beep-y instrument from 0:21 on. 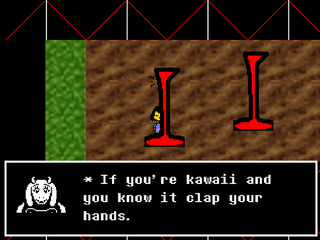 Toby testing stuff out (February 8, 2013). The font used is wider than in the final.

The room shown here still exists in the final as "room_overworld", but the textures used were deleted, resulting in black space.

Compared to the final, the early version has blockier graphics. LV is next to the player's name, and there is an extra stat EN, which Toby says stands for English, though more likely stands for Energy, which is an unused stat in the demo's code.

Dated April 5, 2013 (one month before the demo release), this leaf puzzle was made a bit easier in the final version. Other parts of the ruins were also lacking markings or cracks on the ground at this point.

On May 2, 2013, an earlier version of the Undertale Demo (GAMETEST_7) was showcased on their stream. Despite Only being 21 days from Public Demo's release date, it features a number of differences like concept art for the intro, a placeholder menu, and a bunch of other placeholder assets in the ruins.

In April 2021, a recreation of GAMETEST_7 was made and although it can't be shown here for being a recreation, it has a list of significant changes that GAMETEST_7 has from the Public Demo.

2013-2015, the phase when the game was being developed via Kickstater, resulting additions of the newer areas.

It's the Temmie Shop in a overworld sprite form.

Temmie Chang made an overworld sprite of So Sorry from the front, but it was not used until later versions of the game, where he appears outside of the Art Club room in the True Pacifist epilogue only after fighting him.

The demo's soundtrack on Bandcamp features a few musical differences compared to the demo.

The song on the OST "Can You Really Call This A Hotel, I Didn't Receive A Mint On My Pillow Or Anything" was named "Hey This Wasn't Really What I Was Expecting From a Hotel, For Example You Didn't Even Leave a Mint on My Pillow" when revealed in a Kickstarter update, and has the filename "hey_this_wasnt_really_what_i_was_expecting_from_a_hotel_for_example_you_didnt_leave_a_mint_on_my_pillow.mp3" on Toby Fox's website. It was uploaded on October 30, 2014 at 8:58 AM.

This prototype version of "Stronger Monsters" is found on Toby's website, as well as in a Kickstarter update. The only major difference seems to be that the end is shorter. It was uploaded on December 18, 2014 at 8:16 AM.

Compare the end of this track with the final:

Various unreleased music tracks were posted to the Undertale Tumblr the day before the game's 1st Anniversary.

A calmer, less quirky-sounding version of Alphys's theme. It was rewritten for the final version because Toby felt it was too similar to "a certain lab song from another game" (most likely referring to Dr. Andonuts' lab theme from EarthBound). "Here We Are", the theme for the True Lab, appears to be based on this early theme.

An early version of Undyne's battle theme. Although the melody is mostly the same, it has a considerably more melancholy and less aggressive tone compared to the final version due to being written before Toby "really knew Undyne’s personality".

An early take on the eponymous song. Compared to the final version, this is less bittersweet-sounding and is played in a minor key. Toby was inspired to change the guitar backing to a new melody (which itself served as the basis for "Memory" and "His Theme") after hearing the song "Redline Day" from the 2009 anime film Redline.

Toby Fox doesn't specify what this was meant to be used for, only stating the track's name in the Tumblr post. Definitely meant to be an area theme, but it doesn't sound quite like anything else on the soundtrack. Maybe that's why it was scrapped...?

"Dogsong", arranged as a parody of the Metroid ending theme. Apparently, if you completed the game quickly enough you would have gotten an image of the Annoying Dog in a bikini as a "reward": 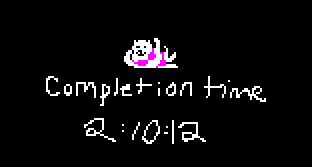 During the Hotland section of the game, after meeting Alphys, she sends many status updates through the underground's social media platform, Undernet. It seems at one point, the notifications were able to be toggled through a variable.

On Toby Fox's Twitter, he notes that at one point Mettaton would save your essay to the hard drive as an image, but it was buggy, and thus was removed.

Retrieved from "https://tcrf.net/index.php?title=Prerelease:Undertale&oldid=1290154"
Categories:
Cleanup > To do
Games > Games by content > Prereleases