Professor Layton and the Unwound Future

Professor Layton and the Unwound Future is the third and probably most well-received game in the Layton saga, where Layton and Luke travel to a London set 10 years forward to stop the professor's future self, who has supposedly turned evil. It's the longest game in the series with a whopping 15 chapters (prologue and epilogue included) and over 200 puzzles counting the weekly ones, but it still got a surprisingly good localization from Nintendo.

Actually, given the heavy reliance of some of the game's puzzles on Japanese-language subtleties, it's rather surprising it got localized at all.

c904.limg and c905.limg are sprites of dummy characters, used for testing dialogue.

g19.cimg is a very poorly-drawn top-screen map, likely used as a placeholder or for testing purposes. 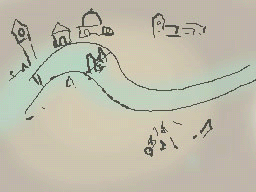 m1014a.cimg and m1015a.cimg share this graphic that was probably also just for testing, as suggested by the quality and little location markers with labels. 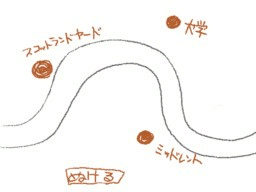 p1601a_tst.limg, p1701a_tst.limg, p1806a_tst.limg, and p1808_tst.limg are exactly as described: test sprites for objects and people on the Touch Screen. One is Don Paolo's flying machine from the front, one is a static NPC sprite of Bostro, one is Don Paolo's flying machine again but from the side (and drained of color), and the other is the glass cage Flora was trapped in and the machine Bill Hawks was hooked up to.

ebg093.limg is an image from Curious Village's end credits (as well as Hidden Door). 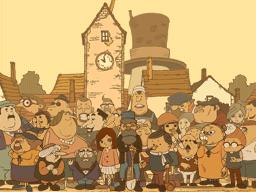 12.cpck contains a line of text explaining what the next cutscene to be played is.

The exact reason why this is present is unknown, as there are no other brief summaries of cutscenes in between text where they play. It's possible that it was put there to remind one of the localizers to go back and add the code to play the movie and they simply forgot to remove it, or that it was to give context of the scene to the other localizers translating/proofreading the text.

13.cpck contains another line that explains itself.

14.cpck contains rather bittersweet words from Professor Layton, talking about Claire. This is placed between the last line of non-cutscene dialogue and Luke's letter, meaning it was likely intended to show up after the cutscene of his final farewell to her and before the cutscene of Luke's departure, or after both cutscenes but before showing the contents of Luke's letter. Note that the Japanese version has been slightly edited to remove the code for furigana (writing kana on top of kanji to help kids pronounce it), which may look like regular characters in the same sentence to non-Japanese speakers.

99.cpck features various Japanese text, as well as three pieces of text that each say 'test'.

As with most localized Japanese games, the sub-menus for kana are dummied out; only alphanumeric characters are left. Oddly enough, a set of symbol characters got excised as well. 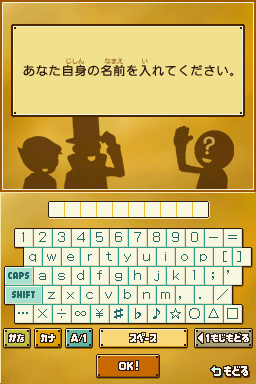 The parrot in the Japanese version can talk to twelve people in the game. And by "talking", we mean using 45 pre-defined words to complete sentences, to answer them. Your parrot starts without knowing any words, but he learns new words as rewards for some puzzles.

You choose from the Parrot menu the person you want to play the minigame with. When you get to the place where that person is, the parrot will appear above their heads. Talking to the person starts a minigame where they'll say two sentences; you have to fill in the blanks of the reply correctly.

A percentage appears on the menu as well of how friendly the parrot is with Luke; it unlocks the bonus puzzles when it reaches 100%.

In the localized versions, this minigame has been replaced with another one where you tie ropes between sticks so that the parrot bounces on it. The goal is to deliver objects to these twelve persons, and there are no longer words to unlock, just the twelve delivery missions for each of these people.

The text relevant to the parrot conversations is still more or less used in the English version, repurposed as regular discussions. The minigame might have been removed due to being redundant, since the Story Book already offers a similar challenge.

While the main story's puzzle count is the same between all versions, this is not the case for the downloadable puzzles. The original Japanese games all offered 52 Wi-Fi puzzles, out of which 35 were localized for the third and fourth games (an improvement over the 26 of the first two games). Some of the DLC puzzles were added in the main story, and NoA decided it wasn’t worth it to replace the pun-heavy DLC ones as they were already struggling with the main puzzles.

However, the rest of the DLC puzzles (17 puzzles) are still in the US version, complete with unaltered Japanese graphics and fully-functional solutions. Only their titles and texts are blanked out. They can be accessed by hacking the save file to unlock them.

Oddly enough, there is another unused puzzle, Puzzle W034: Cluttered Bag 2, that's never unlocked in the US/EU despite being functional and fully translated in English; that's a shame...