Project Gotham Racing 2 , released in 2003, is a simcade racing game for the Xbox and is the sequel to Project Gotham Racing. This game had a much longer development cycle compared to the first game, as it was not a spruced up port of Metropolis Street Racer, and was much more larger in scope. In taking on a more involved development cycle, car modelling in this game was outsourced to less talented companies (sometimes to disastrous results, with some of the cars such as the W12 Nardo and SVT Cobra lack detail compared to high end Ferrari models in this game), the soundtrack listing was tripled in size and exotic car manufacturers like Pagani, Koenigsegg, Ascari, and Bentley made their debut to the series amongst others. 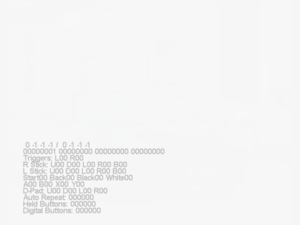 Lets you see what controllers are connected, which buttons are currently pressed, how strongly they're being pressed, and their representation in hexadecimal. This display is only shown on the main menu.

In this game, all tracks are listed internally as their corresponding city name followed by a number, for example "Florence 11", "Washington DC 3", "Barcelona 5", etc. Each of these cities also has a route marked 0, which (with the exception of Stockholm and Edinburgh) loads a free-roam version of the city with most barriers removed. An easy way to access these tracks is to edit PGR2\Frontend\Cars.ini, as every car has a route assigned as its Time Trial track. As these open cities were presumably used for testing and not intended for actual free roam use, there are many spots outside of the intended drivable areas where there is no collision and the car will fall through the map.

The game contains a fully functional Maserati 4200 GT, with completed model and physics data present. The model is named "4300gt.pak_hrd" and is located in PGR2\Cache\Cars, while its physics data is present in "4300GT.ini" in PGR2\CarDynamics. The car lacks its own audio and frontend entries but can be used by either swapping over an existing car, or editing the frontend files to add it to one of the existing car classes.

The game also contains the model for a BMW M Coupé, named "M Coupe.pak_hrd" in PGR2\Cache\Cars. Unlike the 4200 GT, the M Coupe does not contain its own physics data, but this can be borrowed from a similar car such as the M3 Coupe or made from scratch. As with the 4200 GT, this car lacks its own audio and frontend entries, but can be added back to the game or swapped over an existing car.

Present in the same folder is a file named Demo.ini. It was used for configuring demos like the E3 build and the trial version present on the disc included with issue 26 of the Official Xbox Magazine.