This page details one or more prototype versions of Addams Family Values (Genesis).

A debug-enabled prototype of the unreleased US version of Addams Family Values was released in March 2021 by Aetius.

Debug commands are available by default in this build, many of which use the extra buttons available on a 6 button controller.

Press X while playing to enter the debug menu. It functions the same as the final game: select Continue to resume normally, or Exit to warp to the location set in Section and Room. Hold the Mode button while pressing the D-Pad Left and Right to decrease or increase the Section and Room index values by 10.

The line of dots is shifted one tile to the right in the final game.

Press Y while playing to toggle the disable collision flag stored at RAM address FF0A8A to walk though walls and NPCs/enemies. Holding the button also acts as a freeze frame function.

Press Z while playing to add Small Rocks, Blue Marbles, Magical Seeds and Swamp Slime to the inventory, with a quantity of 100 for each. Note that the final version of the game included a few more features: add Lurch's Bowling Ball and Shockwave, and restore HP to full.

Press Mode to open the Journal (map), even if it's not in the inventory. Press Mode again to exit.

This debug feature isn't mapped to any button. Instead, use Pro Action Replay (PAR) code 000788:078C to map it to the Z button in place of the Debug Reload Weapons function. Unlike the final version, which is hardcoded to only display the smashed pillar hidden staircase cutscene, this version will cycle through every cutscene. Note that the programming expects to show a total of 32 cutscenes before looping back to the beginning, but there are only 16. The game will crash trying to open the viewer after all 16 cutscenes have been shown.

While in the inventory, move the cursor to the slot of the item you wish to add or remove, and press the B button. Exit and reopen the inventory to refresh the view.

The mysterious Portal Potion is present, but no further clues to its purpose have been found in this prototype so far.

Unlike the SNES version, it DOES have a portrait that displays without crashing the game: 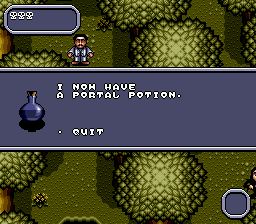 Use Pro Action Replay (PAR) code 1A3CA8:0011 to view the portrait by changing the item Gomez gives you when starting a new game.

The Black Egg can't normally be obtained as an inventory item. The portrait is broken and doesn't display correctly, but from what's visible it looks to be the same as the SNES portrait. 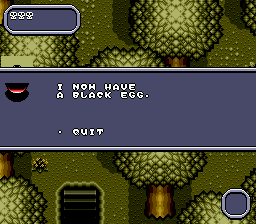 Use Pro Action Replay (PAR) code 1A3CA8:002E to view the portrait by changing the item Gomez gives you when starting a new game.

The Journal icon was changed from what looks like a tattered map to a hardcover book that's much more representative of the portrait graphic.

The Shockwave has a picture of an hourglass for its inventory icon.

The portrait is also an hourglass.

The SNES manual (which details several prototype elements not found in the final game) describes the Hourglass as follows: "Use to briefly freeze all attackers on screen."

Shockwave appears to have replaced it.

These portraits with IDs $30, $31, $32 and $33 don't exist in the final game. Apparently, at one point in development it was possible to find batteries that would upgrade Fester's lightning bolts. It's not yet known if the programming for these upgrades are still in the game. The SNES manual (which details several prototype elements not found in the final game) describes the batteries as follows:

Level 2, 3 and 5 refer to the dungeons the batteries could be found in.

The text is formatted differently.

The English translation for the in-game dialogue is 100 percent identical to the final game. There is a single difference in the text scripting: when Max's Munch Manual is given to Granny in the final game, the cookie refill counter also gets reset. 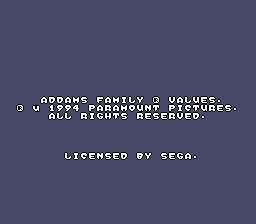 The Sega logo and copyright and license screens are present but bypassed in this prototype. Both are non-skippable and were possibly disabled to reduce boot times for more efficient testing. To restore them, use Pro Action Replay (PAR) code 000348:0007 or Game Genie code A6BT-AACJ.

The second and third parts of the copyright and license text are different. The prototype is missing the ampersand and copyright symbols (or they do not match up with their assigned hex values of $7C and $40, respectively). 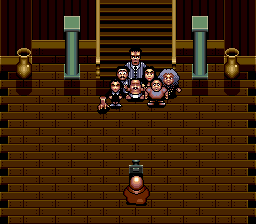 The game freezes at this moment during the ending in the prototype. In the final game, Fester then walks over to join the family for the photo, which is followed by the family photo cutscene and credits roll.

The family photo cutscene does exist in the prototype (and is exactly the same as the final game), and can be seen with the debug cutscene viewer. 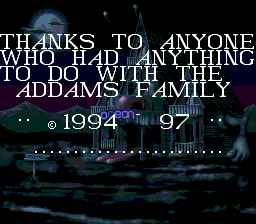 The credits roll is also present, but with placeholder text. To view it, have Pro Action Replay (PAR) code 000348:0003 or Game Genie code ANBT-AACJ active on boot.