Identical to the Japanese version at this point, with the exception of "FCI/" being added to the last line. 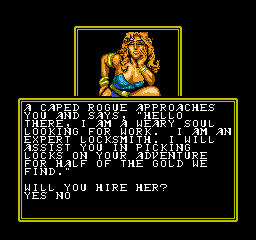 In the city of Hillsfar, the player can encounter people on the streets. In the computer versions, there is a male thief and two different female thieves. The NES final removes one of the women, possibly for being a bit too... revealing for Nintendo's standards.

The English script at this point contains references to alcohol, religion, and violence, all of which were removed from the final to comply with Nintendo of America's content policies.