This page details one or more prototype versions of Ar tonelico II: Melody of Metafalica. 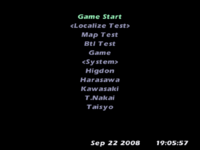 A prototype of the US version of Ar tonelico II was released by Hidden Palace on March 20, 2021 as part of "Project Deluge". Built on September 22, 2008 (about three months before the retail release), the game at this point has a lot of half-translated things and a vast amount of debugging options.

The game boots into a massive list of debugging options used to test various aspects of the game.

Start the game in debug mode. You can use R3 to finalize the main game loop and back to the debug menu.

Before starting the game, the program will check whether the free RAM is enough, and will refuse to start if free RAM is too low.

This menu contains lots of submenus, which are various categories of dialogues. If you entered a last level menu, the game will show a dialogue balloon containing the message, and a string. These strings looks like:

Use the D-Pad to change message entry.
Use ○ to go back.

The menu entries in this menu can be divided into two groups according to the ending 'Gp' and 'Tx'.

The Tx represents the method how the program cuts a texture from a large TIM, and Gp represents how the textures make up a scene, window image, etc.

However, any 'Tx' entry after the entry 'Q002dTx'(including) should toggle the display mode through pressing SELECT after entered. Or you will see nothing. The naming of these entries correspond with the QvMap id.

Some 'Gp' entries looks collapsed, if you enter one, the program will alarm it can't find the file, and some other errors and assertions aiming will be reported.

The HigScene will freeze the program when running on a real console. PCSX2 will report TLB Miss and keep running, so you can press ○ to go back. But if you press ×, the program will crash the emulator.

The debugging output can be printed to the console of PCSX2 in the beginning (The string "---CacheClear!"), then nothing printed though the same subroutine still working and if you break at the point, you can see the string that passed to the subroutine is perfect. Maybe it can work on DTL-T10000 via DECI2 or something else, but I don't have one, so I will appreciate it if somebody can make further research on it.

does the same job.

The intro to the game in this build is voiced over, while the retail version is not.