This page details one or more prototype versions of Bomberman '94.

In 1993, a demo disc containing an early version of Bomberman '94 was released. The demo disc was called Bomberman '94 Special Version. The demo was made to show off the Battle Mode in Bomberman '94. This article will cover the differences between this and the final game. 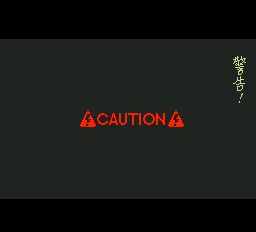 The demo starts with a "Caution" screen. 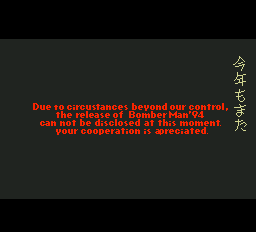 After that, we get a screen telling the player that more info on Bomberman '94 can't be revealed at the moment. It is interesting to note, that the Japanese text is entirely different from the English text.

There are many changes between this and the final title screen.

Bomberman '94 Special Version's soundtrack is taken from Bomberman '93. This music is used as placeholder since the Bomberman '94 music had not been completed. 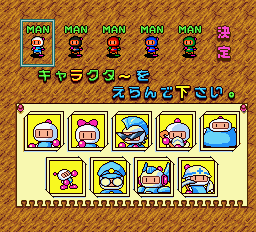 Special Version lacks a character select. As a result, you can only play as Bomberman with all human players.

The battle start screen has different colors, and some graphics are different.