This page details one or more prototype versions of Bubble Bobble (Arcade).

This late prototype of Bubble Bobble was dumped by brizzo and added to MAME in July 2017. The main gameplay is close to finished, but it's missing a lot of the polish and hidden secrets found in the final version.

A message in the sub-CPU gives a build date of May 14, 1986, about three months earlier than the first retail build of the game. 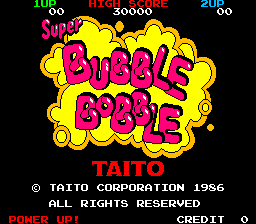 All of the elements related to unlocking Super Bubble Bobble mode are absent from the prototype, including the following: 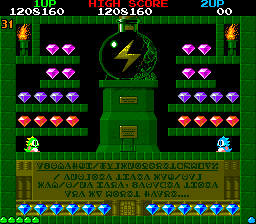 The "POWER UP!" and "ORIGINAL GAME..." codes are similarly absent.

The final game has a dynamic difficulty system. The game's current difficulty value is stored at RAM address (0xE5DC), and is initially set to one of four values depending on the difficulty dip switches (Switches B1+B2):

The difficulty variable is influenced by a number of actions: For instance, going a certain number of rounds without dying will increment the counter, and dying decrements the counter. Difficulty caps at 1E.

To determine what special item will appear in each stage, the game checks the condition for every special item in reverse ID order at the start of the stage. The player has to pass a certain threshold to get an item to drop. That threshold can be one of four numbers depending on the game's current difficulty value.

Altered values are in bold.

In both versions, special red pulsating bubbles will randomly replace one of the bubbles that flow into the stage. In the prototype, there's a 1 in 256 chance of this occurring. In the final, it's a much less likely 1 in 4096 chance.

The following items are missing from the prototype: 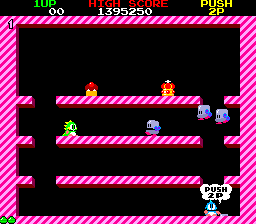 Both versions have an item that only spawns after Round 100 has been cleared (either ending counts): 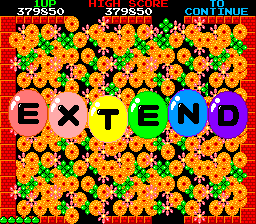 The prototype's EXTEND animation is very much unfinished. The bubbles bounce up and down for a few seconds before the game moves on to the next round. 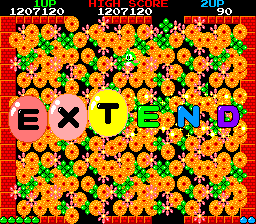 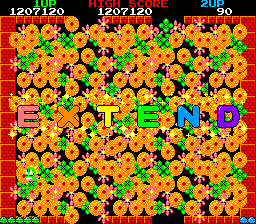 In the final game, Bub or Bob bounces on each bubble, bursting them and revealing the sparkling letters inside. 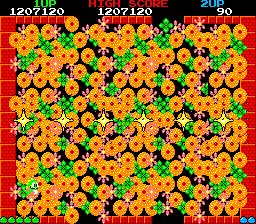 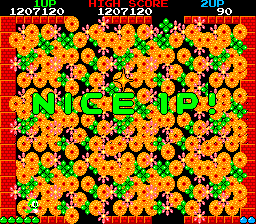 After that, the player will jump repeatedly on the side of the screen, the letters will form into a single spark, and "NICE 1P!" or "NICE 2P!" will appear on the screen. The spark will then add an extra life to the player's life bar.

In the final version, the EXTEND bubbles are initially animated much faster than they are in the prototype. Once Bub or Bob bounces on the first letter, they revert back to their original speed. 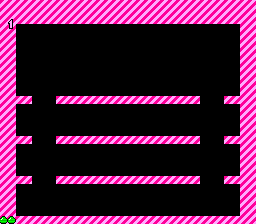 The biggest difference between the prototype and the final game is the inclusion of a fully functioning round editor! Simply start a new game with Edit Mode (Dip Switch B7) active. 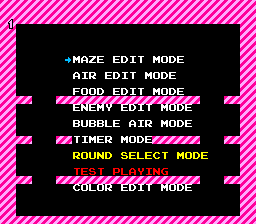 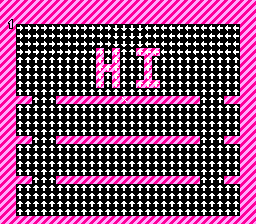 Brings up the stage editor. That x-shaped symbol is the cursor.

Allows the user to change the air currents in the stage. 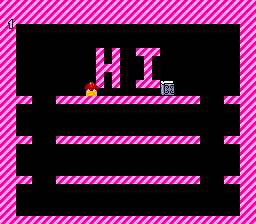 Allows the user to change the spawning positions of the point and special items. 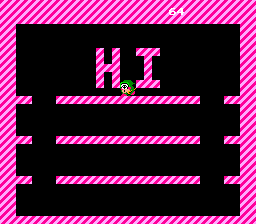 An enemy placement mode. Up to seven enemies can be placed in a round. 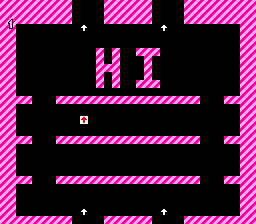 The name of this mode is a little confusing - this allows the user to create those holes in the floor and ceiling that bubbles flow out of (like the EXTEND letters and Fire / Water / Lighting bubbles).

Exits menu, counts down for 243 frames, then resets the game. That's it.

This is the same mode seen when the user starts a new game with Edit Mode active. 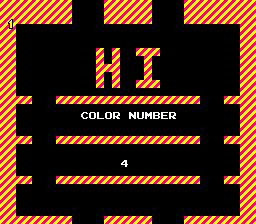 Chooses one of eight palettes for the stage. 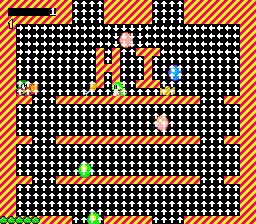 Tests the current room setup. The player will stay in the same round even after all enemies have been defeated.

Press 1P Start to go back to the debug menu.

Rounds 34 and 35 switched palettes in the final version.

Betty and Patty are missing from Round 100.

Both versions will spawn a special item on Round 1 if the player enters the name "SEX" into the high score table. In the prototype, it's an eggplant. In the final game, it's a fork.

While the first animated butterfly graphic was repurposed as an inanimate treasure, the second one wasn't so lucky. These graphics were overwritten by the clear bubble graphics seen in the intro screen.

So, the remaining mystery: What were these animated butterflies supposed to be used for, anyway?