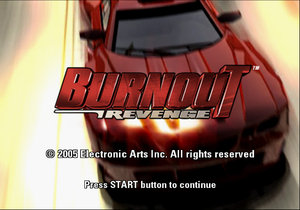 This is a somewhat late version of the game with plenty of changes and stuff to unpack, internally marked as Alpha 7 and as a Preview 2 build. The ISO was dumped by AlexKVideos1 in October 2017, he bought the disc from an anonymous owner. Compiled between July 12 and July 14, 2005. 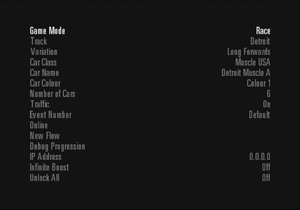 There is a hidden debug menu that can be accessed by replacing a different menu. The provided code below replaces the Progressive Scan menu (_vt$29CB4ProgressiveScanSelectState) with the Debug menu (_vt$22CB4DebugDebugMenuState), but it can essentially be replaced by any menu.

What’s interesting about this menu, you can play with more than five computer vehicles. Perhaps a test for online compatibility before it got scrapped?

Since all but one of the buttons are greyed out on the main menu, with the help of a bit of editing, the other sub-menus can also be accessed.

While this menu technically is accessible through the Debug menu mentioned earlier, the other way of accessing this menu is by replacing the regular Main Menu (_vt$16CB4MainMenuState) with the Multiplayer Menu (_vt$19CB4MultiplayerState).

What's notable here is that Crash mode lists 108 junctions to select, whereas the final game only has 38. However, most of the Crash junctions in this list have no code implemented in and crash the game when selected.

Similarly to the Multiplayer menu, the Main Menu here can be replaced with the Driver Details menu (_vt$25CB4DriverDetailsMenuState).

Aside from the different menu design, the tabs in the Records menu let you select a track, which then lists the records for that specific track, whereas the final game switched it around and give you event tabs. The Extras menu also lists Challenge Sheet videos, which were placed in the actual Challenge Sheet that can be viewed after completing a challenge. 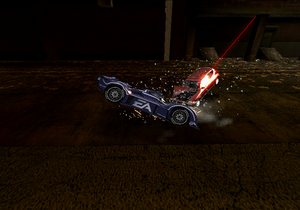 A normally inaccessible game mode called Car Viewer can be accessed through the quick start menu. Its controls are as follows:

Changes that were made to the environment to a track. Sometimes it's just the amount of props that differ, other times everything seems different.

Aside from the way less visible props, the most notable thing about Sunshine Keys is the time of day. It is also seen in various trailers and training videos that were made earlier in development.

A texture that was meant to be used with the cut Burnout News feature. Strings and videos of this same feature can be seen in this page as well. GLOBAL.TXD\aftermath-logo

Everything here is found under FEMAIN.BIN\b4choiceiconnav\*:

The medals that are displayed next to a completed event have an additional check mark in the final game.

All but one of the location icons remained unchanged. That being the Lone Peak icon. Nationpark_icons.tif

Every single icon was redesigned to be less smooth. Some icons are also unused. This build doesn't have standalone Burning Lap events, the icon that'd later be used for Burning Laps is used for Eliminator events in this build.

And just for the sake of comparison, the pre-release Eliminator icon against the final Burning Lap icon.

The final build has a unique color for each rank, but this build alternates between 3 different but similar rank icons, along with an additional dirt01 texture overlaying those three full icons. Rank_dirt01.tif can also be found in the final game, where it goes unused.

Normally Burnout Revenge uses a yellow trailed dot that'd follow the path of a track, however there are two early unused textures that show the entire track at once. Without enabling the texture alpha channels, all the surrounding environment can also be seen around the track as well. Interestingly, the final game still has Detroit01_L1.tif in the files, however Tokyo02_L1.tif didn't make it through.

The FE\TEXDIC\* directory has a bunch of additional textures that aren't used, or at the very least differ slightly.

The track overviews in DETROIT.TXD, HONGKONG.TXD, and TOKYO.TXD have no color, and are much larger than the textures used in-game. These are 768×768 in total, made up by 6 textures - three 512×256 textures, and three 256×256 textures. They've been joined back together for viewability here.

WORLDMAP.TXD for the most part matches the texture that's used in this build (a feature that ended up being cut from the final game), with the only real difference being it having somewhat worse transparency dithering (Most noticable around the islands of Canada). These textures are split in three 512×512 textures, and one 256×512 texture - together they make up one large 1792×512 texture.

The textures that show each location from above when selected are all different in this build. Some are still similar, but others are barely recognisable. These textures are normally split into two textures, first one being 128×256 and the other being 512x256, with the 2nd wider texture being usually placed first. They have been joined back together into a full 640×256 here.

The strings that are all stored in MAINUS.BIN have a bunch of unused or changed lines.

Strings likely meant to be used with the Burnout News broadcast, as seen in the WIP Rewards video.

This build has subtitle strings meant to be shown during the introduction tutorials, despite not even having the tutorial cutscenes in the game's files. None of the voiced subtitles are not found in any of the later builds, including final, but the on-screen text subtitles are. Some subtitles have duplicates with different IDs.

These subtitles are almost fully identical to the Basic Tutorial shown in the final game, with the exception of:

This video is found under multiple names, those being ATTR_N.M2V, MULTI.M2V and PREVEVNT.M2V. This footage is used for the “airplane flying around the globe” cinematic for a Preview event, since it was not implemented in yet. In this build, it has no sound.

Some videos used in the earlier Demo build are still left in this build.

The clip that shows the Criterion logo when you start up the game is way shorter and doesn't have the additional scene mentioning Rabin Ezra yet, though this build is compiled about 2 weeks after his death.
It is named CRRW_*.M2V.

The WIPRWRDS.M2V video has five different clips combined into one. These have been split apart with their appropriate timestamps listed from where they were taken.

This background video lacks the orange filter for the game's clips, and the vertical resolution has been reduced to 352px for some reason.
It is also found under multiple names in this build, those being CREDS_N.M2V, CREDS_P.M2V and MAINMENU.M2V. Only the MAINMENU.M2V file has been removed from the final.

This build doesn't have any strings referring to these Holes left over, however the earlier Demo builds do!

Incomplete versions of the Rank Up videos.
The early videos have two variants, one with an _N prefix which are in 30 FPS, and another with _P, being 25 FPS. In the final EU build, the _P videos are identical to the final NA ones, in 29.97 FPS.

Located in the OVID folder is a video file named TITLES30.M2V. This is the previous game's intro sequence.

Retrieved from "https://tcrf.net/index.php?title=Proto:Burnout_Revenge_(PlayStation_2,_Xbox)/Alpha_7_(PlayStation_2)&oldid=1347956"
Categories:
Cleanup > To do
Subpages