Proto:Castlevania: Symphony of the Night (PlayStation)

This page details one or more prototype versions of Castlevania: Symphony of the Night (PlayStation).

A version of Castlevania: Symphony of the Night demoed at E3 in 1997. Its text has been translated into English, but the game itself is closer to the Japanese version than the final English releases.

The Konami logo sequence is the same one used in the Japanese version.

The title logo is the same as the final English logo, however "-E3 Version-" is printed under the subtitle and the background is the same lighter shade of gray the Japanese version uses.

The string for unformatted memory cards is not displayed properly. The final version swaps the button mapping for this option, using Triangle for Yes and X for No (probably to avoid accidental card formatting). The Japanese version and E3 demo use their respective confirm and cancel buttons for Yes and No.

The logo displayed on the loading screen is slightly larger in the E3 version, making the subtitle a bit easier to read. Strange that this was changed for the final version.

Graphical text such as the location names and the message displayed when activating the elevator have not been replaced by their English equivalents yet. All voice acting is still in Japanese as well. "-E3 Version-" is printed in the upper right corner during gameplay in this version.

The game over image has been replaced by this "to be continued" screen with an estimated release month. The character dialogue that replaces the game over music at certain points during the game are still present in this version. English translations of this dialogue are included in the final version, but they are never played.

The kill count in the main menu is labeled "BEAT" like the Japanese version. Inaccessible menu options are not darkened, as they are in the Japanese and final English versions.

Japanese text is still used to denote when a direction needs to be held in the special moves list. The final version replaces this text with a red arrow. It also changes the color of the selection box used in this menu from red to yellow, likely to make the red arrows easier to see.

The lining and exterior strings are accidentally reversed in the E3 version's cloak color menu. The time attack option never unlocks in this version, despite translated strings for it being present. 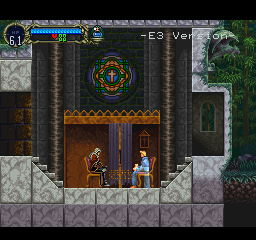 The ghost priest in the Royal Chapel's confessional also still speaks his Japanese dialogue in this version. Like the game over dialogue, an English translation of his dialogue was recorded for the final game, but he no longer speaks. 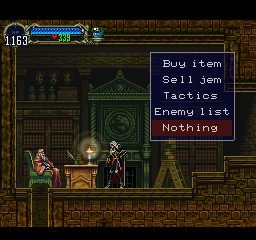 Like the time attack option, the Master Librarian's sound test option is never unlocked. The strings used by it are already present, showing plans were already in place to replace the Japanese voice actor interviews. 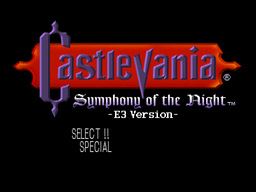 After pressing Start at the title screen, this screen is displayed, which allows choosing between normal and special starts. Interestingly, this screen uses Circle as the confirm button, like the Japanese version, while the rest of the menus are already using the final version's button mapping. The normal option goes into the "select your destiny" menu, like the final version. 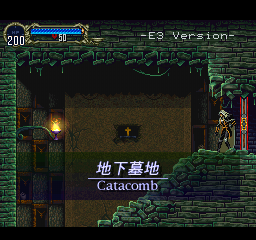 Special, however, starts Alucard in the Catacombs. He begins at level 1 with 200 HP, some basic equipment, and a number of relics. Other equipment is available in the inventory. While the door to the Catacombs can be opened, it is not possible to pass through the load room into the Abandoned Mine. The only way out is to navigate the dark area without the Echo of Bat and use the library card hidden in the wall behind the spike breaker armor.

The switch for making the skeleton ape appear near to the wooden bridge in the Underground Caverns is missing, so the Abandoned Mine, and by connection the Catacombs, cannot be accessed. This is likely due to the Catacombs' load room being blocked off for Special mode. 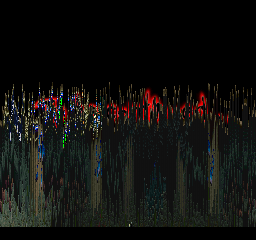 After defeating the werewolf and Minotaurus in the Colosseum, Alucard says his dialogue as normal, then a game over is triggered. This prevents obtaining the Form of Mist, so the game cannot be completed by normal means. 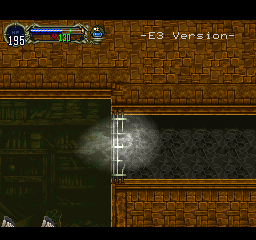 However, this version's saves are compatible with the Japanese version, meaning these two road blocks can be bypassed in that version, and the save can be loaded in the E3 version, allowing the rest of it to be explored.

All of the item placements are the same as the Japanese version. This means the cards to summon the two familiars that were removed from the final version are available. 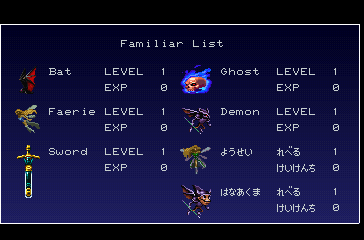 While both cards will appear in the list of relics and are functional, it is clear that plans were already in place to remove these familiars, since their name, level, and EXP strings were never translated in the familiar list. The Sprite does not sing when sitting in a chair in this version, as she does in later Japanese revisions.

If the Catacombs are entered, it is not possible to exit them through the load room, as is the case when starting there in Special mode. Again, the only way out is to use a library card.

The intro is based on the text used in the Japanese version, but with a minor localization change made to it - Ralph C. Belmont was changed to Trevor Belmont. The final version made more significant changes to this text, rewriting parts of it. The Dracula X graphic shown after this text has already been replaced with a Castlevania graphic. 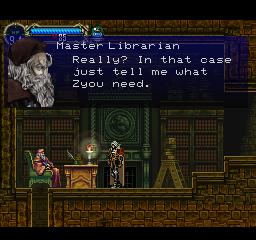 There's a typo in one of the Master Librarian's lines.

The ferryman's name is all question marks in the E3 version. 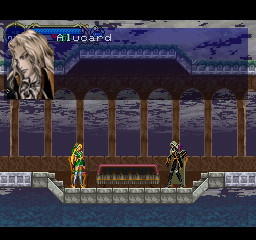 No text is displayed during the second conversation between Alucard and Maria in the Royal Chapel. Their names and portraits change, but these changes do not sync up with the Japanese voice acting. 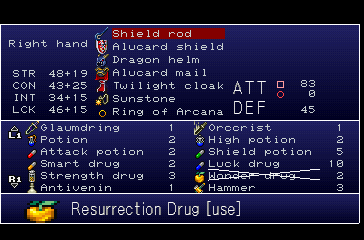 Most drugs were changed to potions - the shield and attack potions already use this terminology in the E3 version, despite clearly being pills like the smart and luck drugs. Antivenin was changed to antivenom, probably because the latter term is more common in English. Glaumdring and Orccrist, two of many Tolkien references in the game, were changed to Dark Blade and Luminus, despite other references being kept (and several which weren't present in the Japanese version being added). The doria was changed into a plate of gyros. 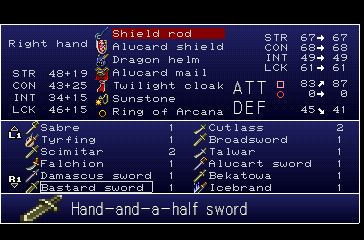 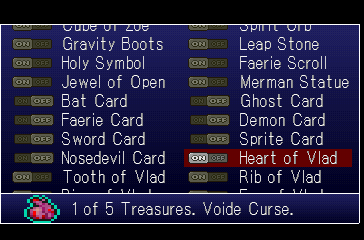 The two items used by the Faerie were noted as being familiar-only items; in the case of the wonder drug/life apple, this resulted in a less-than-descriptive description of its ability. The bastard sword and rapier's descriptions were shortened, despite their original descriptions fitting fine. The grape juice has no description of its own in the E3 version and uses the one from the curry rice instead. The doria's description was replaced with a new one for the gyros plate. The peanuts are now noted as being difficult to eat (the player must catch them when using them), rather than describing them. The Heart of Vlad's description seems to misspell "voids" but the final version replaces this with "avoid."

The free talk option was changed to sound test for the final version. 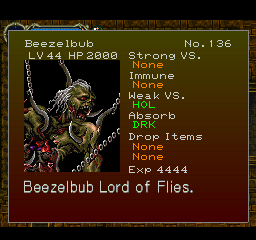 Monster name fixes in the enemy list. Unfortunately, these mistakes were not caught in the table of strings used for the menu and Faerie Scroll relic, which still use misspelled names in the final North American version.

Strings for the sound test are present, despite not being implemented yet. The Nocturne track was blanked out in the final strings, since that track isn't available in the sound test.

Cancel is misspelled "cansel" in the select your destiny menu.

The strings displayed when overwriting a save are slightly different, uncentered, and can appear glitchy in certain save rooms. 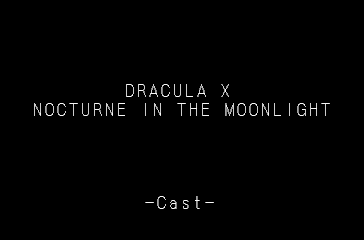 The credits still refer to the game as Dracula X: Nocturne in the Moonlight.