12,000 BC was another era whose map came away with only a few changes, although there are still more than there were in 2300 AD:

Despite being a small map, Zeal had quite a different look in the prototype:

The remnants of the world in 12,000 BC after Zeal's great fall are largely in a preliminary state in the prototype. Nothing is functional, and there are numerous changes:

Enhasa begins a strange trend of Zeal towns actually getting details removed from the final: in this case, four stools, two wall banners, a potted plant (in the center of the room), and a railing (in the upper-right corner) were cut, although an extra stool was added near the entrance. A book was also placed on the table in the upper-right room, and the center staircase was extended slightly.

Note that all the individual tileset changes in the Graphic Differences page also apply to all three Zeal cities.

Kajar saw more significant changes than Enhasa did, which includes more detail removed from the final. The lower-left room was almost completely redesigned, with only the bed and desk remaining in their original positions. An oddly-placed bed was removed from the central hall (with the healing pool and rug moved to the center of the room), a stool was removed from the sitting area in the upper left room, and two potted plants got the axe. The pillars and stools in the magic laboratory were also all removed, for some strange reason.

Like all the locales in Zeal, Zeal Palace was slightly more elaborate in the prototype. A table and several stools were removed from the upper walkways on the left side of the main hall. The pillars near the upper left door were also moved, to match the other two doors. Finally, a few minor tileset issues were resolved in the final, as a bookshelf near the entrance is cut off at the very top, and the wall near it uses some improperly placed tiles.

Two distinct differences in the hallways in the prototype: First, the carpet has a different (and much uglier) palette. Second, and more noteworthy, the carpet continues up the stairs, as can be seen in the final via emulators.

Other changes include a second cave near the very top of the village that ended up removed, the entrance/exit tunnel in the upper-right corner being added in the final, and the "house" entrances changed from using staircase graphics to simply looking like ordinary caves. 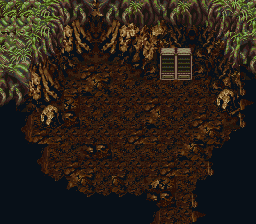 An empty, unfinished house also exists in the prototype, accessible via the extra cave mentioned above. It was removed entirely from the final.

The Beast's Lair was literally twice as large in the prototype. Only the latter half of the area (in slightly modified form) is used in the final. It's inactive, but events can be reactivated with the following codes: 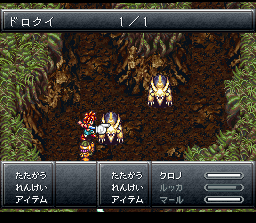 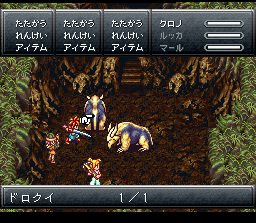 There are a pair of extra encounters with Beasts in the first tunnel, which obviously don't exist in the final. Their stats hadn't been worked out yet at this point in development, so they're extremely weak, having only 1 HP. 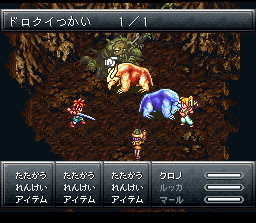 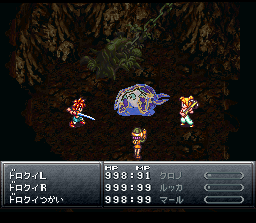 The Mud Imp, Red Beast, and Blue Beast are still fought at the end, but also have no stats/script and only 1 HP. The two beasts use the more elaborate boss death animation in the prototype, whereas they die just like normal monsters in the final. Probably changed because this looks strange.

Mt. Woe, while almost finished, has several distinct differences in the prototype. As usual, it's sleeping, but can be woken up with these codes:

...in a manner of speaking, anyhow. Even with the codes active, all it does is enable proper exit data, as there are no monsters present and the chests contain nothing. "Silent Light" continues to play as the background music in the prototype, while the final replaces it with the same howling wind heard on the 12,000 BC world map.

So the only big changes are in area design, as follows:

The most obvious difference of note are several very visible tileset glitches. The treasure chests, dirt patches, and rocks at the very bottom of the ledges, are all either in a preliminary state, or are outright corrupt.

Design-wise, a somewhat-glitched platform in the upper right corner was removed from the final, and the double chain connecting to it was reduced to a single chain, which now connects to the next area. Two treasure chests were removed, and two others were repositioned slightly. More detail, such as extra rocks and flowers, was also added to the final, and the lower right corner of the middle-right platform was extended for some reason.

The main area of the mountain is not significantly different in the prototype. More of the same tileset glitches seen previously still exist here, with the treetop graphics also showing the same unfinished state. A small cliff was removed from the middle-right platform, the chain in the bottom-right corner was altered slightly, and the treasure chest near it was moved up a little bit.

Several chains were repositioned in the final, making the area a bit more straightforward, but also allowing for a few side-paths where treasure chests are located. The middle-right platform was moved up a fair distance, and the chain connecting to the summit was shortened considerably as a result. In addition, the lower right platform was altered, probably to remove the illusion of another path in that direction. Finally, most of the treasure chests were either moved or deleted entirely. 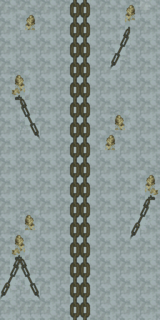 This screen consisting of two long chains connects the last area of Mt. Woe to its summit. It was removed entirely in the final, and you're taken directly to the summit from the last area instead.

A strange graphically-glitchy glowing statue of Giga Gaia (the area's guardian/boss fight) was present on the alter atop Mt. Woe in the prototype. The area was otherwise untouched. Its removal is probably for the better; it bears more than a passing resemblance to the film Predator.

Finally, Giga Gaia itself underwent some changes, as it had a strange worm-like lower body in the prototype. These extra graphics were removed entirely in the final. 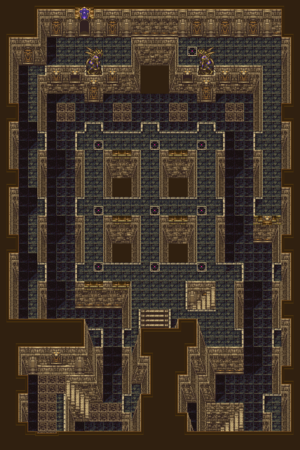 Some sort of dungeon located within Zeal Castle. It's unfinished, but can be accessed by enabling a walk-through-walls code and passing through the left bookshelf in Schala's room. The inaccessible-looking door in the upper-left corner exits to the throne room, which hints at the possibility that it was necessary to sneak in there by another means at one point in the game, presumably upon returning to Zeal with the Epoch after the Prophet seals the Gate.

These two rooms are also located with the Zeal Dungeon maps, and while none of the staircases lead anywhere, it seems likely they were intended to connect to the staircases in the middle of the main room in some fashion.

A couple paths also exist in the Zeal Dungeon maps. It's possible they were intended to be a couple bridges that would appear to allow you access to the otherwise inaccessible upper door, as they fit over the gaps between ledges perfectly.