The ruined future's world map is completely identical to the final, with a couple exceptions:

The underground sewer in 2300 AD is mostly complete, but is devoid of events. They can be re-activated with the following Pro Action Replay codes:

As for how it differs from the final...layout-wise, it's primarily the same, with only a few minor tileset tweaks having taken place. There are several differences, however... 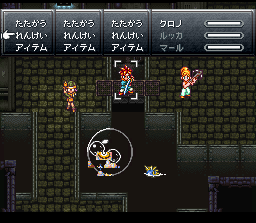 First off, the Nereid monsters sometimes glitch up graphically when they use their bubble attack. It's harmless, does not affect the battle, and was fixed in the final.

The first section of the sewer is exactly the same in terms of layout, but the second section differs quite significantly. Physically, it was mostly unchanged, with the exception of the bridge near the south exit being broken, and the platform just to the left of it being made slightly wider in the final. The major difference here is the events, however...

In the final, a note may appear near the entrance if certain conditions are met. It warns travellers not to make a sound or they'll be attacked, which is precisely what happens if you examine any of the various objects scattered around (even the save point). 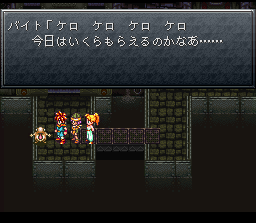 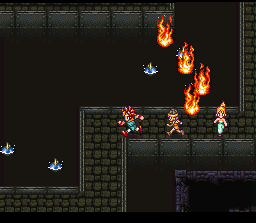 In the prototype, the two talking frogs had an expanded role in this dungeon. Talking to one would send four fireballs after you, which are able to pass through anything, and you have to escape from them. 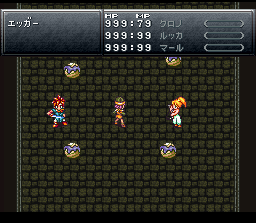 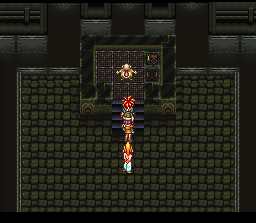 Getting caught by one of them leads to another room, where you must fight a battle against four Egders, then speak with the other frog in order to escape. The "fire race", however, only seems to take effect once. While there are Nereids in the room, they are inactive and do not attack unless you return after having outran the fire.

Finally, attempting to cross the broken bridge results in your team rather lazily jumping over it; it looks quite strange, which is probably why the bridge was fixed in the final.

The aforementioned extra room where you must fight to escape. It also once showcased a battle in an early promo video, and was completely removed from the final.

Like the Factory below, Lab 32 is fully open to exploration in the prototype, with the design, events, and monsters all entirely unchanged. There are still a few differences, though.

The prototype's Jet Bike race did not keep track of score or distance remaining. The HUD at the bottom of the screen was also significantly different, with the "boost" icons actually being slightly more detailed in the prototype! 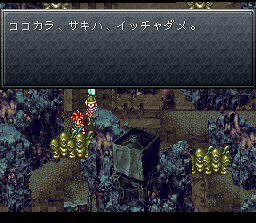 Four robots block the west exit, stating "YOU CAN'T GO ANY FURTHER" (the text is in all katakana; the rough Japanese equivalent of ALL CAPS, basically), as this is as far as the "sample" extends.

Being one of the few areas meant to be explored in the prototype, the Factory is mostly complete in terms of both design and events. That didn't stop a few differences from sneaking in, however. 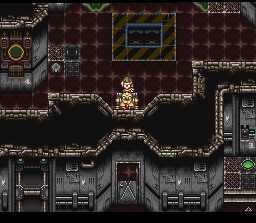 The first change comes after disabling the lasers downstairs. In the final, the two panels in the upper middle of the screen close immediately after the lasers are off. In the prototype, they remain opened until you leave the screen and return. The door also glitches up slightly after the lasers are disabled; it re-closes itself, but the tiles for it don't completely refresh, resulting in a strange half-opened look.

Finally, the battle with the mess of slime monsters that show up as a result of this plays the boss battle theme, whereas it simply plays the normal battle theme in the final. 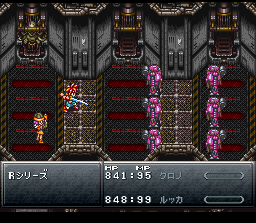 The R-Series are a dark pink color in the prototype, as opposed to the pale blue palette they sport in the final. They're no less brutal to poor Robo, however.

A futuristic mockup of Leene Square in 2300 AD! It's in a very rough and incomplete state, with numerous missing tiles (and incorrect transparency), and the path that would lead to Gato's area is unfinished entirely. It also contains no events. No idea what this may have been intended for, although a similar but much smaller map was used in one of the endings in the final: 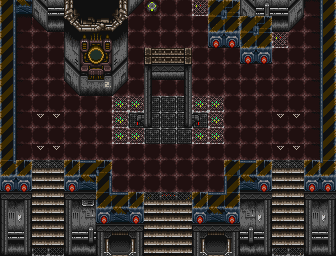 They may depict the same area, but there are seemingly more differences than similarities between the two. For starters, they don't even use the same map ID; the map in the prototype was deleted entirely, with only a blank map left in its place. Also in the final, the staircases are longer, the walls are different, the structure where the bell would hang is thinner, the building in the back had the door changed to a wall, and numerous floor tiles were changed. This may well have been a complete redesign from the ground up.