This page details one or more prototype versions of D/Generation (DOS). 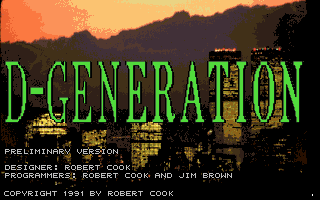 Version 0.62 is a version of the game before it got further funding from a publisher to continue development. There are no known clues as to how this version was leaked.

The titular D/Generation has a completely different design, making it look more human. However, the palette in-game as his sprite uses a special blue palette, making this change unnoticeable during normal gameplay.

In addition to slightly different artwork on the background buildings between the two versions, the final has three landing lights in the corners that glow in a star shape as opposed to the two rounder-looking lights in the prototype.

In the prototype, the D/Generation waits in an empty room with an early version of the exit terminal in the room behind it.

Originally, the D/Generation was led to a containment room where it was trapped and a password input would kill it. The password appears to be a placeholder and is simply "enterline". In the final, this was simplified to a switch-activated radar dish.

Unlike the final version of the game, there are a number of key combinations for debugging purposes enabled and available at any time. These are rather buggy, though, so use with caution.

Retrieved from "https://tcrf.net/index.php?title=Proto:D-Generation_(DOS)&oldid=696058"
Categories:
Cleanup > To do
Games > Games by content > Prototypes