The Windows version of the Demo was localized by NIS America in collaboration with Spike Chunsoft, and released on Windows in four languages: Japanese, English, Simplified Chinese, and Traditional Chinese. The Demo had previously been released exclusively in Japanese on PS4 and PS Vita ahead of the original Japanese release of Danganronpa V3: Killing Harmony, but was given a worldwide localized release through Steam for Windows as well as PS4 and PS Vita ahead of the English and Chinese localised release a year later. A Korean release of both the Demo Version and the final game were planned[1], but the project was scrapped close to release after Danganronpa V3: Killing Harmony was banned for release by the Korean ratings board[2].

The Demo Version is an abridged alternate universe version of the prologue and first chapter of the final published game. It features three cameo appearances from previous games who never appeared in the final version of the game: Makoto Naegi, Hajime Hinata, and Yasuhiro Hagakure. As well as presenting an abridged version of the main plotline, the Demo Version parodies the previously Japan-exclusive demo for Danganronpa: Kibou no Gakuen to Zetsubou no Koukousei (known in the West as Danganronpa: Trigger Happy Havoc), and as such it features the students investigating the death of Yasuhiro.

Class trial assets for Yasuhiro Hagakure, who is never visually seen in the Demo Version except for his corpse. These assets are the versions used in the final game to represent when Tsumugi Shirogane is cosplaying as Yasuhiro Hagakure, as evidenced by the stylized "V" and "3" visible in his eyes.

Unused text log graphics for Yasuhiro Hagakure, who, as before, is never visually seen in the Demo Version, and only speaks a single line at the finale of the game where the text log is disabled. The portrait does not feature the stylized "V3" irises. 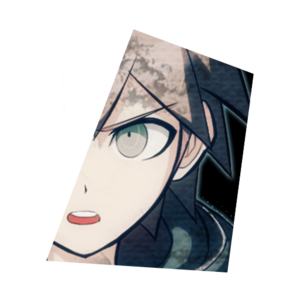 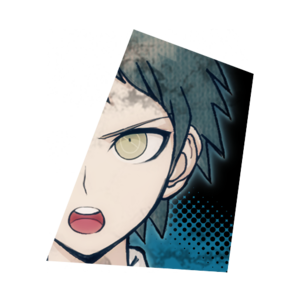 A parent folder called "brain_drive_kR" can be found in the demo assets, made for the cancelled Korean localization of the game. The subfolders contain the same texture files for the Psyche Taxi minigame as the English and Japanese equivalent folders, but the Korean folder contains translated text for the "Psyche Taxi" graphic, "Obtained Hidden Monokuma!" graphic, and "Concentrate Alert" graphic. 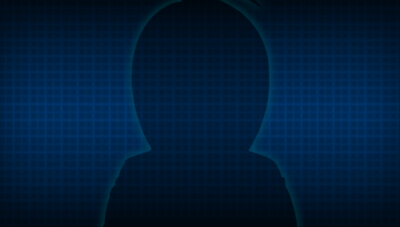 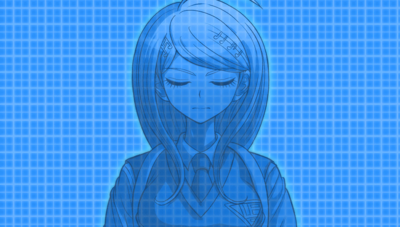 Kaede never has a "Hangman's Gambit Ver. 3.0" minigame in either the demo or the final game, so these sprites are unused here and removed completely from the full game. These are presumably newer than the ones seen in promotional materials, which have her eyes open.

Unused early versions of the character images used to create the splash screen CG at the beginning of Class Trials. There is one image for each student, excluding Rantaro, who doesn't have a tile in the final game either.

An early version of Shuichi Saihara's Chapter 1 map pixel sprite icon featuring placeholder text and no upper torso. The image is of hatless Shuichi, with "帽子あり" (bōshi ari, meaning "with a hat") written on it. This placeholder was presumably used before the art had been completed for the pixel of Shuichi wearing his hat.

A low resolution Monokubs entrance pop-up pun, replaced by "Rise and shine, Ursine!" in both the demo and the final game.