This is a sub-page of Proto:Disgaea 2: Cursed Memories.

An English localization prototype of Disgaea 2: Cursed Memories dated May 29th, 2006 was released by Hidden Palace on March 20th, 2021 as part of Project Deluge.

Just like in prototypes of the first Disgaea and Phantom Brave, an extensive debug mode can be enabled and disabled by simply holding X, then pressing L3 on controller 2 at any point after the initial loading screen. Unlike in the aforementioned other games, the game will not play a confirmation sound. 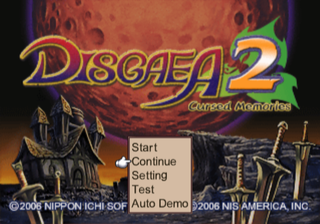 The "Test" option will start a new game with many level 9999 characters and a lot of money, while every second time the "Auto Demo" option is selected, the game will start a computer-controlled demo battle on one of several randomly selected maps. 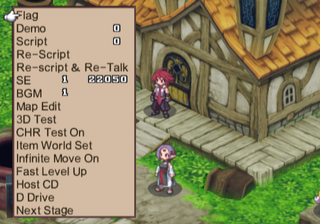 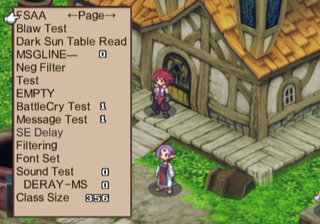 Pressing Select on controller 2 will open the in-game debug menu. Press Right on the D-Pad or analog stick while "Next Stage" is highlighted to access the second page of the menu.