This is a sub-page of Proto:Duke Nukem 3D (PC).

While the actual gameplay is the same as v1.1, the CON files inside the prototype contain stuff that is much more interesting. 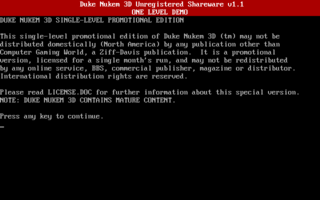 This prototype contains a unique boot up screen that warns that the demo should not be in any other publications besides Computer Gaming World and a message to read LICENSE.DOC for information about changes. The player must also hit a key in order to continue the boot-up sequence, unlike the final game.

The Duke3d.grp is the same as the one used in the v1.1 shareware version. However, it contains a new DEFS.CON, GAME.CON, and USER.CON that are included with the rest of the files when unzipped.

LICENSE.DOC contains additional sections pertaining to how the CGW demo can be used and distributed. The header has also been changed to specify that it is for the CGW demo.

The CGW demo's installer contains some text not seen in other versions of the installer.

Only Hollywood Holocaust (E1L1) can be played in this prototype, even though the level files exist for the rest of the shareware episode and Red Light District (E1L2) can be seen in the viewable demo.

Oddly, this prototype lacks the "Press F1 for help" image that appears when starting a new game that the other shareware versions of the game have. 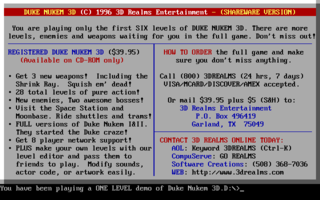 The exit screen contains an additional message stating that the player has just played a one level demo of Duke Nukem 3D.

The prototype's CON files contain references to a weapon called "CYCLOID". In DEFS.CON, this weapon's pickup sprite, ammo and first person sprite take the exact same positions that the final's Devastator does, meaning that the CYCLOID is a prototype version of the Devastator. This makes the CGW demo the first prototype to feature the Devastator.

The name for the weapon seems to come from the fact that the Devastator behaves the same as the Cycloid Emperor's primary attack.

This prototype marks the first appearance of the Freezethrower, though it can only be found in the CON files.

In the CGW demo, the Freezethrower is a bit stronger than the final's, doing 35 damage per projectile instead of the final's 20.

The Sentry Drone first appears in this prototype's CON files.

The Cycloid Emperor makes his first appearance in this prototype, replacing the DUMMYDUKE bosses from the previous prototypes.

The Overlord first appears in this prototype, but has an interesting difference. His attack code lets him either shoot rockets or shoot bullets. In the final game, he can only shoot rockets.

His ability to fire bullets in this prototype matches a pre-release screenshot of the Overlord with two guns mounted underneath his stomach in addition to his rocket launchers.

He has 2,000 health, compared to the final's 4,500. This seems to be a leftover from the BOSS3 character seen in previous prototypes, as the Overlord uses BOSS3 as his internal name.

Several bits of code for the Space Suit have been cut in this prototype (which are also missing in the final game), suggesting it was removed around the time this prototype was compiled.

Shrinker ammo pickups still give only one round of ammo instead of five.

Ammo pickups for the CYCLOID (Devastator) give 10 rounds of ammo per box, while the final's Devastator ammo pickups give 15 rounds per box.

Freezethrower ammo boxes give 24 rounds instead of 25.