This page details one or more prototype versions of Fallout.

Mentats were taken intravenously in the demo. The filename for their graphic still reflects this.

The tool was redesigned to looks like something more useful for fixing stuff, but retains its overall theme. Its name was also changed from 'Wire Cutters' (see text changes).

It looks like the Water Chip had a different icon, taken from the same render at a different angle with different lighting.

Filenames in the demo indicate that these were not just changed, but repurposed entirely, and their use in the final does not reflect their original intended use in the GURPS system.

Note that Empathy is a perk in the final game, but uses a different (though similar) graphic with a woman in place of the mutated rabbit.

Quirks are what perks were called earlier in development.

The Sex Appeal trait is re-used in Fallout 2.

These are graphics present in the demo which have no equivalents in the final. 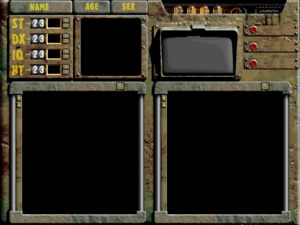 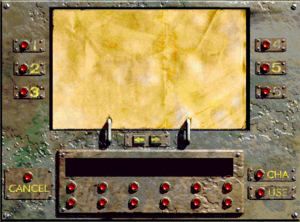 The skill page, presumably where perks (called 'quirks' at this point in development) would be displayed. 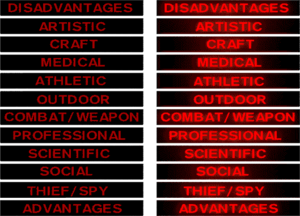 Early skill names, which would have gone on the character editor screen. Artistic, Athletic, Professional and maybe Craft have no equivalents in the final, and everything else either has a different name or is missing altogether. Advantages and disadvantages were rolled into one to create traits.

There happens to be sound effects for weapons in this demo, though some of them go unheard and unused because they aren't featured here. They have no reload or "out-of-ammo" sounds here, either.

This is the text file which contains the names and descriptions for items, many of which were changed between demo and final. Most items lacked descriptions and all weapons lacked strength requirements, so only examples where the name or description are present and differing in both demo and final are noted.