Proto:Freddi Fish and the Case of the Missing Kelp Seeds

This page details one or more prototype versions of Freddi Fish and the Case of the Missing Kelp Seeds.

A demo version of this game, like a good chunk of the other Humongous games, was distributed among various discs, and on their website. This demo focuses on rescuing Gabby from inside the cave. Guess the plot about an entire population starving to death was just not exciting enough for this demo. It's got a good chunk of differences from the final game.

This page only covers material unique to the demo; anything that survived to the final is covered in the main article. 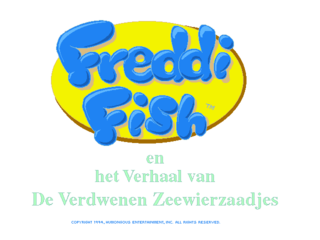 For some odd reason, the Dutch title screen is in the demo's files. This did not make it into the final game.

The old whale bones make an appearance in this demo, but since the bone and the bottle are irrelevant in the context, they never appear despite remaining in the game's data.

A good chunk of the inventory items were left in the demo version, even though only the wooden boar-.. eh no, PLANK, the purple shell, and the single sea urchin are used. Their equivalent cursors are also present in the game's data, even though only the one for the wooden plank is used. The peanut butter and jellyfish sandwich, the clock, the purple shell, the fishing pole, and the crank handle were all left unaltered for the final game, but the remaining survivors in the demo had at least one change.

The key was oddly resized and distorted in the demo version. This was more likely a mistake than anything, as other than its distortion, it looks the same as the final.

The pearl got a glow and was enlarged significantly for the final game.

The wooden plank/board had a blue glow added to the bottom in the final game to match the other items.

The "glowing shell" doesn't look very shiny in the demo version; it's just the purple shell with a little green border. The final game gives it a much better glow.

Originally, the bottle would still have the paper rolled up in it in the inventory. The final game changed it so it's unrolled and in front of the bottle. 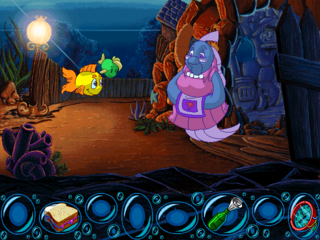 This prototype screenshot from the old Humongous website shows it was even planned this way in the early stages.