This page details one or more prototype versions of Gearheads (Windows).

The demo version of Gearheads was distributed in magazines in the late 1990s, and was available for download on Philips Media's and R/GA's websites.[1][2]

There is no date in the executable file, but it was last modified on 16 February 1996, some months before the retail version (which is dated 23 May 1996).

Differences from the Full Game 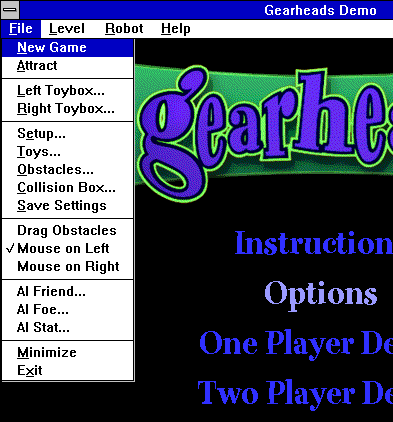 This can be accessed by hex-editing the string at offset 21ADF to "AppMenu" (without the quotes) suffixed with a null. This menu is very similar to the hidden Full Menu in the full retail version, and the code to load the debug dialogue boxes is present, but the dialogue boxes themselves are not, so those items do nothing. If one copies the dialogue boxes from the full version with a resource editor, they load from this menu and are fully functional. As on the full game, the App Setup dialogue box disables the sound effects. This can be fixed on this demo by replacing three octets consisting of A3 EA 63 at 47F3 on an unmodified executable file (it'll be followed by FF) with 90 90 90.

Also, Winding on Arrow, when the selected toy is nearly fully charged, changes the arrow to one like the one seen on the first screenshot on designer Frank Lantz's Gearheads page, but it seems bit glitchy: 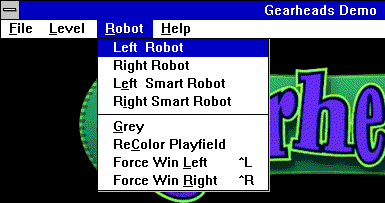 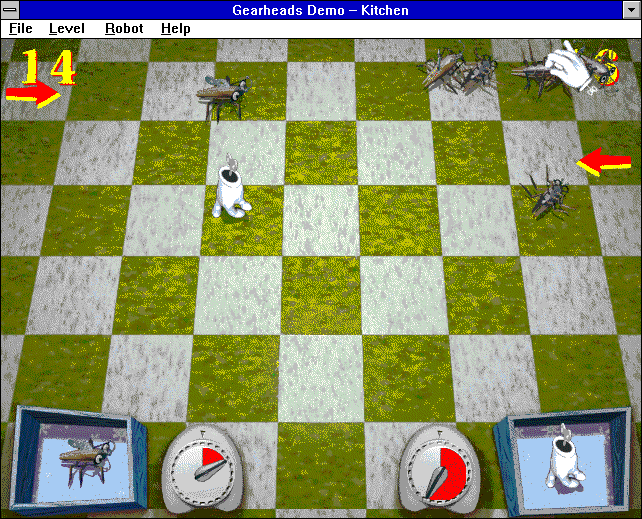 A greyed screen and recolored playfield.

This menu's name is too long for a simple case of hex-editing. It needs to be renamed in a resource editor (which may change the offset that needs to be changed), with which this menu (or App Menu for that matter) can just be put in Demo Menu's place.

These don't appear to do anything or have any connection to the Gear huh? and Gearhead difficulty settings found in the in-game menu (Gearmaster is visible but not selectable).