This page details one or more prototype versions of Golden Axe II (Genesis).

The only known prototype of Golden Axe II. It is very similar to the final version, but all the text is different. The game is fully playable.

Leak date unknown, all the text is in engrish, likely a rough translation by a Japanese person at Sega. There are many minor graphical changes, also several bugs not in the final version are present.

The ™ has been moved from next to the II to above the E, the menu selections were also moved down a line and to the right.

The options screen has yet to have the OPTIONS title added, and a numbered control layout.

All score screens are black as they've yet been given a color. The Duel screen gives the Normal mode difficulty instead of saying Duel, and the character has been moved down 4 pixels.

The brightness of the ruins was toned down severely.

The final camera re-adjusts to the scenery, the prototype does not.

The skeleton corpses have changed.

The first group of enemies have changed, and the screen was moved.

The first gated enemy has been changed.

The credits are missing, placeholders ABCDEF are only there.

The ending sequence location has changed, likely to hide the dead body on the left.

The game over screen does not yet darken. 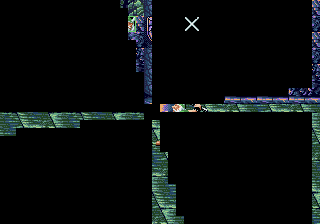