This page details one or more prototype versions of Gran Turismo 6. 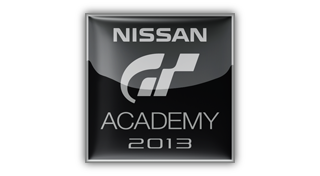 GT Academy 2013 is a standalone PlayStation 3 title that was released exclusively to the PlayStation Store on July 2, 2013. It was described as a demo and currently stands as the earliest playable build of the game that was made available to the public to download and play. The title was available starting from its release date and expired on August 30, 2013, rendering it no longer playable unless modifications or hacking is used.

My Home Screen and User Interface

The player can only configure settings for the Race HUD and the demo timer in the Global category. The options in the other categories are nearly identical to the final version.

Replays can only be played back or deleted while in the Gallery. There is also no control panel while viewing a saved replay, similar to after-race replays in the final.

Note: The final version screenshots were taken on Version 1.00 of the game, where replays ran at 30 FPS and had a strong motion blur effect. This was changed in a later update.

The tutorial in this build has the player drive a Free Run lap around the Silverstone Grand Prix Circuit in a Nissan 370Z (GT Academy Version) '08. Previous GT Academy winner Lucas Ordonez gives hints and tips to the player here, keeping in theme with the then-ongoing competition. What's unique in this build is that a cutscene plays before the tutorial begins, depicting the player avatar greeting his pit crew, getting into the car and then the pit crew dismissing the player out of the pit lane onto the course.

There are five playable cars in this build, with the first two being obtainable via the Dealerships.

Playing as the last three cars normally would involve accessing the Special Events in which they are featured in, but seeing as both of the Special Events require the player to be signed-on to PlayStation Network, and connected to the servers (which is no longer possible), the other three cars are otherwise hidden and can be only accessed with modifications or hacking.

It is worth noting that this car in particular was the only car of the five in total that did not carry over to the final game. The other three GT Academy cars were reworked for GT Academy 2014 in the final game, while the Nissan GT-R NISMO GT3 N24 Schulze Motorsport '13 is an entirely new car.

There are seven playable courses in this build, with the first four being playable in the Beginner Events.

Playing on the last three courses normally (with one exception) would involve accessing the Special Events in which they are featured in, but seeing as both of the Special Events require the player to be signed-on to PlayStation Network, and connected to the servers (which is no longer possible), the other three courses are otherwise hidden and can be only accessed with modifications or hacking.

The exception is the Silverstone Grand Prix Circuit, which is the circuit that the player drives on during the Tutorial, as mentioned above.

It is worth noting that all three Silverstone courses have additional elements in this build. There are several signs of the GT Academy 2013 logo spread throughout various locations in the courses, and there are also indicator signs that depict incoming corners.