This page details one or more prototype versions of Guitar Hero Encore: Rocks the 80's.

Preview builds of Guitar Hero Encore: Rocks the 80s containing unique content and differences from the final game were known to exist since before the game came out, but none had surfaced until the first part of the Project Deluge lot had been made available through the Internet Archive and Hidden Palace on March 20, 2021.

Most notably, this version of the game features an exclusive song, Bow Wow Wow's "I Want Candy", which was widely known about in press previews from the time but cut before final for unknown reasons. Beyond that, assets from Guitar Hero II are retained (more so than the final game), "Because, It's Midnite" features as an unlockable bonus track with a placeholder chart, and a full, undocumented, debug-enabled build of Guitar Hero II comes unused in the game's files.

Much like Guitar Hero II's retail demo, the order of the songs is nowhere close to final. Aforementioned early press coverage bears out the order of songs seen on this disc.

The song missing from the demo side of the above list, "Because, It's Midnite", is listed in campaign.dta under unlock_song, meaning when Career mode has been beaten, it appears in the setlist as a bonus track at the very end. When "I Want Candy" was cut and the setlist reshuffled, "Midnite" had to be reintroduced as a tier track to fill the gap.

The raw disc transfer comes with two ELFs in the root directory, SLUS-21586, which is the one loaded by the game and matches the 80s final disc ID, and SLUS-21447, which matches Guitar Hero II's disc ID. Both of these executables are fully debug-enabled; when 21447 is placed on a Guitar Hero II disc with the missing device drivers (MTAPMAN.IRX, SYNTH_R.IRX, USBD.IRX, and USBKB.IRX, all included with this build of the game in the IOP directory) the game will warn of benign errors and terminate with an error message and stack trace when crashing. This also enables keyboard-based developer cheats, as defined in config/gen/cheats.dtb. 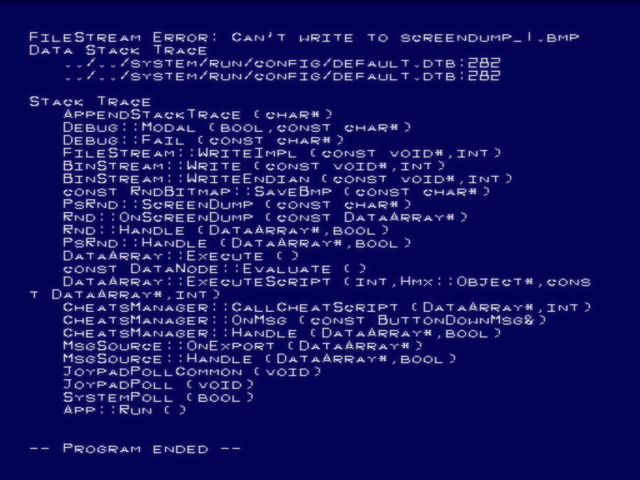 A crash resulting from having no songs defined in one of the game's venues.

The demo's locale text is nearly finalized; only a few spelling errors and formatting bugs were ironed out for the final release. The most notable change is the names of the strings that apply to the final song of the game. Guitar Hero II's final song was "Free Bird" by Lynyrd Skynyrd, while the final song in 80s is "Play With Me" by Extreme. Internally, despite the strings themselves being final, the string names still refer to "Free Bird".