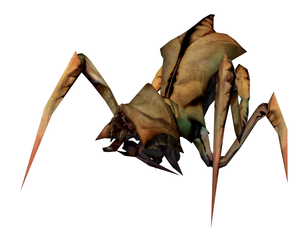 The Antlion is in the game and behaves exactly like he does in the final game, but has a brown exoskeleton and a darker and less-detailed inner body. 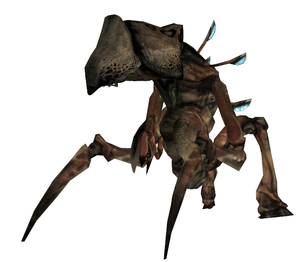 The Antlion Guard has a brown and dull texture in this prototype.

The Antlion Guard is in the game and fully functioning. However, he is bulletproof to everything except a blast from the Combine Gunship's stomach laser as well as regular to sizable explosions. If killed, he drops a Bugbait to pick up, regardless of the map he is on.

The prototype Antlion Guard has a much better bump map than the one in the final game.

The prototype contains a low-poly Antlion Guard model meant for a scrapped DirectX 6 mode. Oddly, this version is much closer to the final design than the prototype's model is.

The Barnacle is in the game and behaves like he does in the final game. The only difference is that his hitbox is located only around his mouth area, making him much harder to kill than its retail counterpart.

When killed, the Barnacle will vomit out human gibs from the original Half-Life (which must be converted to the v37 model format in order to work properly) instead of human skeleton bits. 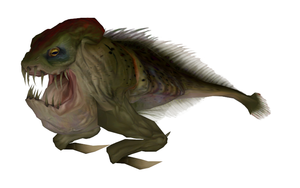 The Ichthyosaur has extremely barebones AI. He will only attack if the player is near his face. Otherwise, he will do nothing. He can be killed, but he does not turn into a ragdoll.

Of note is that the Ichthyosaur's actual hitbox is only in the creature's body. The rest of him can be swam through with no problems. 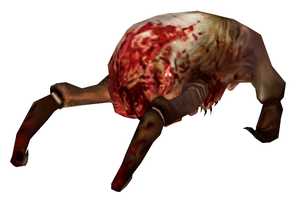 The Classic Headcrab's model is close to the final's design, but the texture is very different. The coloring appears to be closer to the Headcrab in Half-Life, with a light body, but brown limbs. He also has blood on him, which the final one lacks.

The Fast Headcrab keeps the same shape, but the texture is completely different. The texture's basic design is the same, but he has a yellow tint and black spots that the final design lacks.

His health is 10 in Easy and Normal difficulties (the same health he has in the final game), but 20 in Hard difficulty.

Like the other Headcrabs, the Poison Headcrab's model is very close to the final design, the major difference being she lacks the hairs the final one has. The texture looks very different, however. She has a brown body color instead of the final's black textures, the legs use a much muddier and darker design that lack the white bands on them, and the spots on it are located on different parts of her body compared to the final design.

Her behavior is slightly different as well; she will only occasionally retreat when her health is low, and she will abandon the retreat behavior if the player gets close to her after she has retreated.

The halves for the split Classic Zombie design use a completely different design than the one the prototype Zombie uses. The split Classic Zombie has a plain white shirt on with blood on it, no mouth-like gaping wound down his chest, like the prototype and final designs do, has a crudely-modeled and drawn red head when the Classic Headcrab is removed, stained khaki pants with a tear on them, exposing a wound, and what appears to be either very poorly-made shoes or socks on. A complete version of this design appears in an early pre-release image and the pre-E3 2003 trailer.

Remnants of a design based on an older Citizen design (whose textures can be found in the prototype) can also be found. It seems to be limited to the body and Headcrab (which seems to match the Fast Headcrab design instead of the Classic Headcrab design). 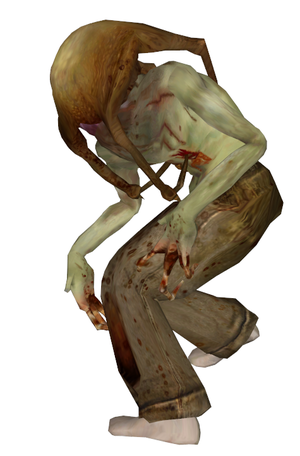 The Fast Zombie's design is completely different from the one in the final game. The prototype Fast Zombie's body is still intact instead of having rotted to a skeleton with patches of muscle on it. He is shirtless with brown pants and has white socks on his feet. When the Fast Headcrab is removed, the Fast Zombie's head is a very pink color and look like it was made out of plastic wrap.

The Fast Zombie doesn't appear to be sequenced right. Some of the errors the prototype Fast Zombie has includes not playing his jump animation when leaping (which makes him look like he's hopping with his idle animation) and not playing a roar animation while roaring after a melee combo, despite having these animations. 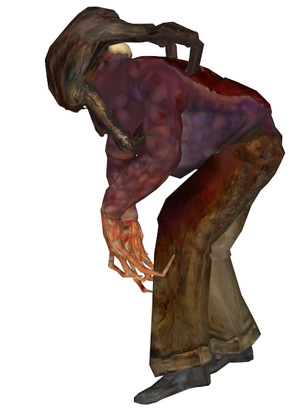 His behavior is the same as it is in the final game.