Civil Protection is very similar to how he is in the final game.

Visually, the only differences between the prototype and final Civil Protection is that the prototype's eyes are a brown color and his gloves are less shiny.

Strangely, he has only 10 health in Medium and Hard difficulties, while he has 40 health in Easy, making him more difficult to kill in Easy difficulty. There aren't any variables to increase his health during the Uprising chapters, like there is in the final game.

The real interesting stuff can be found in the Civil Protection's texture folder. Hidden inside it is a complete set of unused textures for the Civil Protection. These give the Metropolice a brown vest, a lighter blue outfit, a more muddy gas mask, and a red armband. This design was seen on Barney in an E3 2003 demo and some pre-release images. These textures do not work on the Civil Protection model by default because they are split into separate sheets instead of having everything on one sheet, like the prototype and final Civil Protection use.

There are also textures for an even earlier Civil Protection that has him with a more traditional bullet-proof vest, a more baggy outfit, and a patch featuring a unique City 17 logo. Also mixed in are textures for a very early SMG1 world model, back when it was an MP5K. The textures for this model are also listed as missing textures when opening up the model for the VIP's head in the released Counter-Strike 1.5 model sources.

While the model for this Civil Protection variant is missing, a picture of it can be seen via a graphic of Barney that appears at the end of the E3 2003 demonstration.

The Combine Soldier is very similar to his final incarnation in behavior and in the equipment he uses.

The most noticeable difference are his textures. The prototype Combine Soldier has yellow underarms instead of white, a lighter camouflage with a different pattern, a darker head, red eyes, and what appears to be the logo on the Strider and Combine Gunship pasted on his back. The Strider logo lacks transparency, making it look like he had a black box with the texture on it pasted on his back.

He also uses completely different sounds in the prototype. Like the prototype Civil Protection, the Combine Soldier uses full sentences instead of the "fragments strung into a sentence" system that the final Combine Soldier uses. He also lacks the lingo that the final Combine Soldiers use and does not talk to the Combine Overwatch voice. The voice modulation for his voice clips are completely different and makes it extremely difficult to understand what he's saying because of how garbled he sounds. Fortunately, there is a set of earlier voice clips that lack the extreme garbling, making it easier to understand (though not simple because of the low quality the original recordings are).

Of note is that the prototype Combine Soldier has animations for launching grenades from the old AR2, the XM29 OICW. This suggests that enemies were able to launch grenades from guns that have grenade launchers (specifically the OICW), but the ability was removed some point down the line. 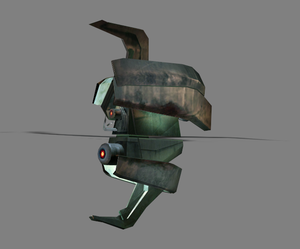 The prototype Manhack keeps the final's model, but uses completely different textures. It uses a much less detailed texture that is a gray shade instead of the final's blue shade.

In-game, the main difference is that the Manhack takes little damage if it is grabbed and tossed with a Gravity Gun. The player must use guns, or better, a melee weapon in order to defeat them. It also lacks the light that changes as the Manhack takes damage, but it still emits smoke when damaged.

Of note is that Civil Protection can freely deploy Manhacks in the prototype, but in the final game, it's controlled by scripted sequences.

Older Manhack textures can be found in the "Materials/models/obsolete/manhackold" folder. The blade for this weapon is used for the "Manhack" weapon. 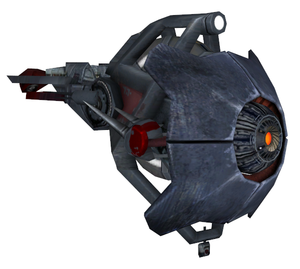 The final City Scanner (not to be confused with the Combot) is in the game, but lacks some animations and a reflective map texture. 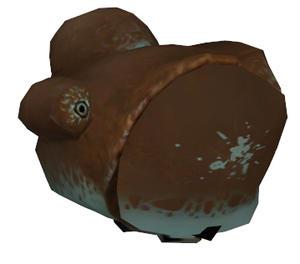 The Shield Scanner is in the prototype, but has much simpler and rougher textures that lack many of the details the final one has. The eye also has a different color than it does in the final game.

The most interesting part is that the Shield Scanner has dedicated code, showing what it was originally meant to do. It indicates that the Shield Scanner was meant to protect NPCs in a squad it was paired with by generating a shield in front of the NPC. The shield could only be generated if the Shield Scanner was open (read: the mechanical tentacles were coming out of it). If it took enough damage quickly, it would enter a "pissed off" state and close up, shutting down the shield. It would pick a squad member to protect based on each NPC's LOS (presumably, of the player) and distance. It could pick an alternate target if the "best" NPC didn't have the best LOS.

A model for the Shield Scanner's shield exists, but it is untextured.

The code does not mention the ability to carry mines, indicating the ability was not thought up when the prototype was leaked. 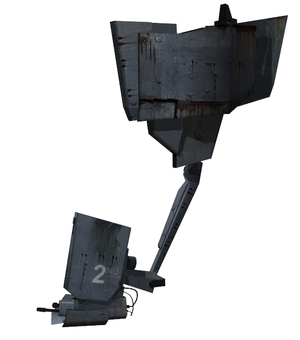 The prototype Ceiling Turret is slightly bluer compared to its final counterpart.

There is also an earlier design inside the "Combine_turrets" folder that has a completely different shape than the final design. There are two variants of it; a whole one without a proper texture, and three models of its various parts with a temporary texture. 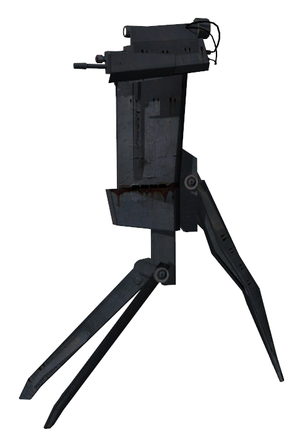 The Sentry Gun behaves the same as it does in the final game, but has a different texture. The prototype texture is less detailed, lacks the yellow logo on it, and has a red stripe on its right side.

There is also an earlier model hidden in the game's files. It uses a shape similar to the old Ceiling Turret model, but is mounted on a tripod.

There is also an earlier model hidden in the game's files. It uses a shape similar to the old Ceiling Turret model, but is mounted on a tripod. 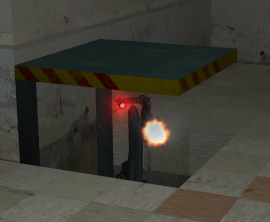 The final game uses a unique model for it. 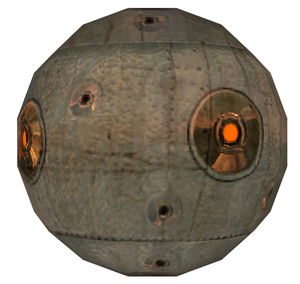 The Rollermine behaves the same as it does in the final game, but its model is completely different; the prototype Rollermine is a sphere-shaped object with red dots inside tan, metallic-looking ovals spread throughout the model. When it begins charging towards the player, spikes with rounded edges sprout from it. The spikes will clip through the ground. 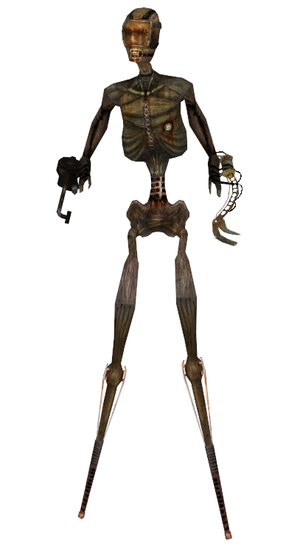 The Stalker is completely different in this prototype. The model is much more simple, the textures give the Stalker a more rotten look, he has different tools on his arms, and the faceplate on it looks to be BDSM-inspired.

By default, the Stalker can only be fought in the "devtest" map.

There is also an unused model of a folded-up Stalker called "w_stalker". He has no animations, and there are no hints as to where he would be used. 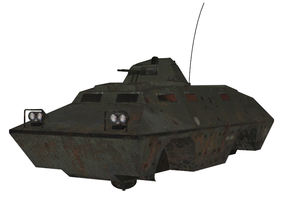 The Combine APC enemy does not exist in this prototype. Instead, it is either a script, such as in d1_canals_end, or static prop, like in d3_c17_06b.

The used Combine APC model is completely different as well. It is a brown, box-shaped vehicle with a long antennae near its rear. The vehicle body and tires are separate models.

A WIP model for the Combine APC exists in this prototype, but it is not used. It has different glass, a bluer body with rust on it, no cannons (?) on the front, and no black in the window part of the rear.

A very early version of the final APC can also be found in the model's name. It lacks textures and most of the top of the APC.

Textures for an older APC can be found in the "APC" folder. These textures are very similar to an APC design that appears in the "props/vehicles" folder.

The "APC" folder also contains a UV map for some windows. It's unknown what version of the APC this was intended for.

The Hunter-Chopper is completely different in the prototype, visually. The prototype version is based on a real helicopter, the Ka-27. The final version uses a fictional design using the Combine's distinct style.

This enemy's AI is much simpler than it is in the final game as well. All it can do is occasionally fire a burst of slow autocannon shots. It cannot spew round mines, like the final version can. It also cannot fire missiles, despite having missile pods.

The prototype Combine Gunship lacks the glowing blue lights on his underside. The white parts of his tail are also darker than they are in the final game. The bottom part of the Gunship's front fins are more detailed in the final game.

In the prototype, however, the most interesting is that the Gunship can freely fire his stomach laser at anything. The final game restricts this to scripted sequences, such as blowing up the bridge the player sees after helping Alyx shut down one of the reactors during the Uprising in City 17. The ability can still be reactivated with a little work in the SDK.

Inside the game's files are models for an unused projectile related to the Gunship. How the Gunship used it is unknown. 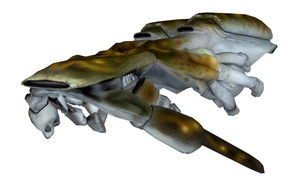 The Dropship's textures are much rougher and less detailed than they are in the final game.

It is invincible, like it is in the final game.

A proper model for the Combine Dropship's container is not in this prototype, so the game uses a trash bin as a placeholder. The trash dumpster does not have a gun to prevent spawn-camping the Combine Soldiers he spawns. In addition, all of the Combine Soldiers meant to be spawned by him appear at once, instead of popping out one at a time with a special "jumping out" animation, like they do in the final game. 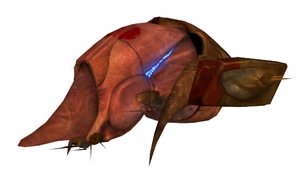 There is an earlier Dropship in the game's files called DropShip.mdl. This design is completely different; it appears to be based on a red beetle, and has engines with a blue tint on them on its sides. The hatch to release troops is found on its rear. The interior does not have a proper texture and the hatch itself is not properly attached to the Dropship's rear.

There is also a separate model for its hatch for some reason, but it uses incorrect textures.

When it flies, its shape is very similar to Boba Fett's ship, Slave One.

In a default installation, the older Dropship's model format is too old to be loaded in the model viewer provided in the prototype. A custom model viewer is needed in order to view it. 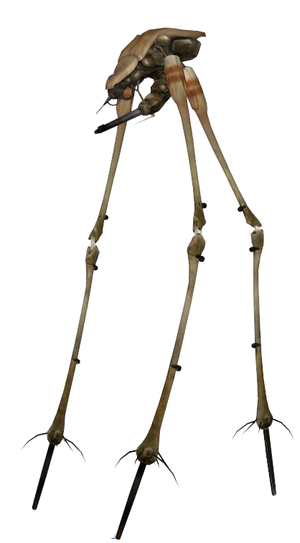 The Strider's texture received a scale overlay on its textures to make him look more detailed in the final game. Most of the texture was darkened in the prototype, with the top of the Strider's sides getting some shading.

In-game, the Strider is a little different from the final because it is nigh invincible due to the fact that he can be defeated by noclipping near him, hitting the use button, then firing an RPG rocket or two while inside him. This will cause the Strider to deactivate and drop an Immolator, which can be picked up.