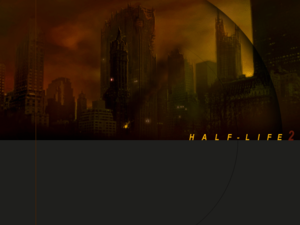 The "gfx/shell" folder contains an unused background texture featuring early concept art of City 17 (back when it was based on an American city instead of an Eastern European city) named "splash". This appears to be a very, very early leftover, as it's formatted like the background menu texture for the pre-Steam version of Half-Life and shares its name.

The folder "gfx/shell" also contains every texture used for the pre-Steam Half-Life menu. 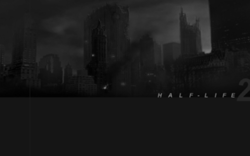 The "gfx/status" folder has unused textures for the console's background (two of them have the word "loading" in the center of them). It uses a black and white version of the concept art used for the very early background logo. These also appear to be a very early leftover, as the textures are named and formatted the same as the textures used for Half-Life's console before HL was moved to Steam.

"Gfx/status" also has unused fonts from the original game, including the font used for HUD messages in the Half-Life prototype. 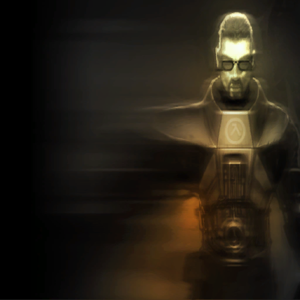 An unused texture called "background" can be found in "materials/launcher". This texture uses early concept art of Gordon Freeman with blurred colors to his left. This was likely used as either a background texture for the menu or for the console.

"sky_airexchange" is a skybox for the cut Air Exchange area. Of note is that one of the skybox tiles has Air Exchange concept art (seen in Raising the Bar) on it.

"sky_borealis" is a skybox meant to be used for the cut Borealis area. It appears in the prototype's "devtest" map, but was removed from the final game.

Based on the name, sky_palace was meant to be a skybox for the cut Vertigo area, which is named "palace" in some places, such as a few Vertigo maps in the WC Mappack.

"sky_spire" seems to be meant for the mysterious "spire" area, which is only mentioned in the prototype's oldtrans.txt and an empty folder in the WC Mappack.

The "Ship" folder contains an unused texture of a life ring. Considering that the Ship folder also contains textures for some Borealis props, it's likely that this was an early texture for the life ring prop in the "props_borealis" folder.

The Bathroom folder contains unused textures for toilets and a sink. Based on how small and under-detailed most of the textures are, it seems that these textures were made before the current ones were.

The same texture is also used for W_Urinal Pipe.

The same texture is also used for W_ToiletLid.

The "materials/models/Pistons01" folder contains the UV map for a scrapped model. Based on its name, it possibly could've been an alternate texture or model for the scrapped pistons found in the "props_airex" folder.