The Health Charger is a brush-based object (meaning it is built in the map editor and not as a separate model). The texture used for it is a redrawn and higher-res version of the Health Charger in the original Half-Life.

The texture for this has been removed in the final game. However, the entity that made up part of the prototype Health Charger is still in the game, but unused.

An early Health Charger model that's built in the Combine's style (like in the final game) can be found in the prototype's "props_combine" folder. It looks completely different from the one in the final game; the only similarity the unused model has with the final model is that it has an object hanging off of it. The only thing that indicates that this model is meant to charge health on the model itself is the text "Combine health" on its left side.

The amount of health the Health Charger has depends on the difficulty. It gives 50 health in Easy, 40 in Normal, and 25 health in Hard. The final game changes it so that it has 50 health, regardless of difficulty.

The texture was not reused for the "old" HEV Charger easter egg model found in the final Black Mesa East, but they do share a few design similarities, such as the notes underneath the hose port on the HEV Charger.

The amount of power the HEV Charger has depends on the difficulty. It gives 75 points in Easy, 50 in Normal, and 25 points in Hard. The final game changes it so that it has 75 points, regardless of difficulty. 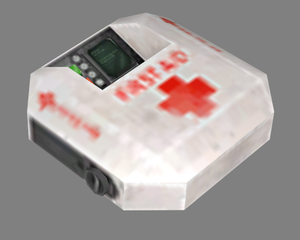 The Medkit looks very similar to the one in the original Half-Life, but lacks the carrying strap. The strap is still on its texture, though.

The prototype Medkit heals 25 health, like it does in the final game. 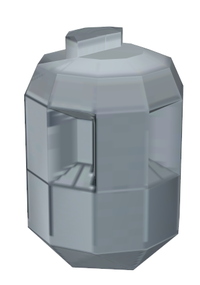 The Health Vial's model is in the game, but it is not dropped by enemies nor can it be found in maps.

The design for it is completely different; it looks like an untextured modification of the Half-Life battery and is not a part of the Medkit model, as the final Health Vial is.

The prototype Health Vial gives 10 health, like it does in the final game. 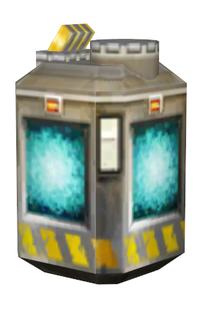 The Battery also looks very similar to its Half-Life counterpart in the prototype. However, it's much smaller in-game. The final game uses a completely different design.

The amount of suit points it gives is the same as it is in the final game: 15.

The HEV model has some UV misalignment issues in the prototype, including a reversed lambda logo. The prototype's model has a large charging port on the back, but the final version of the model replaced it with nothing and uses a different back texture.

Most of the prototype's texture is quite different. The thighs barely have any detail on them and it lacks textures on most of the legs and arms. When compared to the final texture, the collar is a slightly darker gray and the stomach area appears to be a darker and less-detailed version of the final texture.

The Small Bullet is an ammo type used by the SMG2 (though some maps in the WC Mappack suggest the Pistol was meant to use Small Bullets). Small boxes, which appear to be very similar to the magazines used by the SMG2, carry 20 rounds, while large boxes carry 100 rounds.

In the final game, the Pistol is the only weapon that uses the Small Bullet. 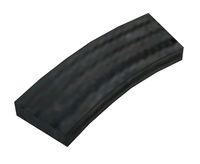 The Medium Bullet is an ammo type used by the Pistol, SMG1, AR1, and AR2. Small boxes look like STANAG 30-round magazines, but contain 20 rounds. Large boxes contain 100 rounds.

The final game has it so that the only weapon that uses the Medium Bullet ammo is the SMG1. 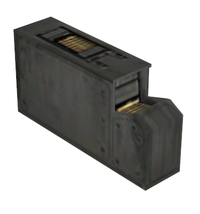 The Large Bullet is an ammo type for the HMG1, though HL2's map editor definition file in the leak suggests that the AR2 used it at one point. Small boxes have 20 rounds and large boxes have 100 rounds. However, the player can never carry more than 60 rounds at once, so they'll never get 100 rounds from a large box.

The OSIPR is the only weapon that uses the Large Bullet ammo type in the final game. 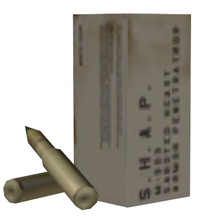 The Sniper Bullet is, as one would expect, ammo for the Sniper Rifle. Each box contains 10 rounds.

Its model is a box with "S. H. A. P" (likely a misspelling of the SLAP loading for the .50 BMG) with two cartridges laying on each other near the front of the box.

The model for this object is in the final game, but the box texture has a pink overlay with "OBSOL33T" written in purple font over it. 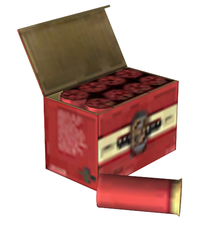 In the prototype, each Buckshot box carries 20 rounds, regardless of difficulty. The final game changes it so that the player receives 24 shells in Easy, 20 in Medium, and 12 in Hard. 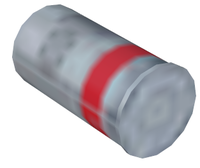 The Flare is ammo for the Flare Gun. It comes in the form of a single flare and a box containing 5 flares.

The model for the Flare is in the final game. The Flare box is still in the game and can be spawned in-game with the console.

The ML Grenade (short for Missile Launcher Grenade, a reference to a cut explosive weapon) is ammo for the RPG, and oddly enough, the IRifle. It's very possible that the IRifle using ML Grenades for ammo is a mistake.

The prototype model looks like a generic missile case, while the final game simply has the missile without any sort of case.

The Missile Launcher Grenade received a model and graphic change to become the final's RPG ammo.

The grenade for the SMG1, called AR2 Grenade internally, has a different model in the prototype. The prototype AR2 Grenade looks like a typical 40mm grenade, while the final game uses a fictional design.

Something interesting is that the AR grenade fired by the SMG1 in the prototype uses a different model; it looks like a 25mm grenade. The XM29 OICW, the weapon that the prototype's AR2 is, also fired 25mm grenades. This gives even more evidence that the AR2 was meant to fire grenades at one point.

The AR2 Grenade has a pickup image to be displayed on the HUD when one of them is picked up, but it is not used when getting one. It is used when picking up a regular grenade, though. 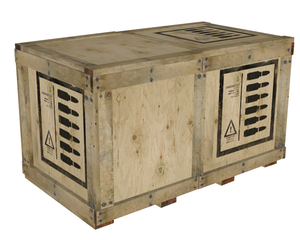 The prototype contains models and functionality for two types of ammo crate; bullet and rocket. The bullet crate can have either Small, Medium, or Large Bullets.

The model is completely different from the one in the final game. It is a wooden rectangular crate set on its side that has a larger ammo type image than the final crates do. The model appears to be based on a regular crate model used in the prototype.

The prototype uses the same ammo crate model (a crate that contains models that look similar to the large box of Small Bullets pickup) for all the bullet types. The final game uses different models for each ammo type, with each box containing the ammo type used by the weapon on the box. The rocket ammo crate uses the ML Grenade's graphic to represent the rockets in the box.

Both types of ammo crates behave the same as they do in the final game if placed in a map.