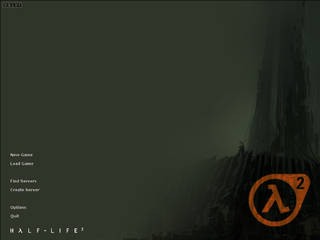 The September 26, 2003 build of Half-Life 2 was compiled more than a year before the game's release. It, along with the Source Engine's source code and several other Valve-related files, were leaked by Axel Gembe, a German hacker who had managed to get into Gabe Newell's account because of an easy-to-figure-out password and began collecting and monitoring what Valve was up to. When Valve discovered they'd been compromised in late September 2003, they cut him out. He shared the code and assets around with his friends, where they ended up in the hands of myg0t, who leaked the files.

Back in the day, this leak was a major black eye for Valve, not only for allowing themselves to be compromised in the first place (especially in such a way), but also for showing that the game was in no way complete four days prior to its original intended release date of September 30, 2003. Now, it's a curiosity to poke around and explore, not something to insult Valve with.

The real gold here is the many unused and obsolete resources, ranging from textures to weapons to unique characters, that were still in the game's files when this build was leaked.

Leaked with the prototype was a collection of .zip files known as the "WC Mappack". The .zip files contain over 1,000 .VMF files (the editable sources of a map), all at different stages of completion and dates, from mid-December 2000 to around mid-2003. When run through Hammer, most maps can be compiled but will be missing textures and models.

There are so many maps, it's impossible to list them all here.

The Mystery of "Spire"

The WC Mappack contains an empty folder called "spire". No maps of this location have been found in the WC Mappack. Spire is also mentioned in oldtrans.txt and has its own skybox, suggesting development advanced enough for it to get a unique skybox. While its maps no longer exist, there are some hints as to what it would be.

Inside oldtrans.txt are these texture listings:

"Spi" stands for Spire. Based on the textures' names, Spire would have been in a snowy environment, just like the Weather Station in the story.

The root textures folder contains a text file called "oldtrans". Inside it is a list containing two sets of texture names. The ones on the right correspond with many textures in the prototype. The left set appears to be old names for the textures and some of the texture names are somewhat similar to how textures are named in Half-Life's WAD files.

oldtrans.txt also reveals that textures were named based on what location they were going to be used at one point. The locations are Urb (City 17), Vert (Vertigo, a cut skyscraper location), deep (Kraken Base, another cut location), hyp (Hyperborea, an old name for the cut Borealis), Waste (the Wasteland, which became the final's Coast and Nova Prospekt locations) and Spi (most likely Spire, see above). There are folders in the WC Mappack corresponding with these location names, but they are empty.

This text file appears to be an old leftover, as it lacks several of the locations seen in the prototype or Raising the Bar (such as the cut Air Exchange, Canals, and the Citadel) and some of the names are somewhat close to how Half-Life named its textures.

To read all of oldtrans.txt's content, see the sub-page below.

The prototype contains almost all of the resources used in the E3 2003 demonstration that officially unveiled Half-Life 2. This includes maps, models, textures, audio, configs used to record and show gameplay footage, and even the demos used to record the footage seen in the videos. However, because of engine differences and issues with resources, most of these maps and demos are broken.

If playing the maps, the player must follow the way the E3 2003 reveal videos played them, or else the maps will break (even more, in maps that are already busted) because of scripting issues.

This prototype also has all of the assets from the scrapped E3 2002 reveal.

The prototype's GUI is almost exactly the same as the GUI used in the Steam version of Half-Life. The differences are that the menu options are placed closer to each other in the Half-Life 2 prototype, the game's logo will change if moused over, the "servers" option and Steam logo on the right-hand corner in Half-Life is missing in the HL2 prototype, and the HL2 prototype console uses an early TF2 icon, while HL1 uses a small Steam logo as its icon.

When the console is open, the game will show the text "Source Engine 2 (build -4 days until 9/30/2003)" in the upper right-hand corner of the screen. 9/30/2003 refers to Half-Life 2's original release date, while the text to the left of it seems to be based on the date the prototype was compiled. Based on the state of this prototype, there was no way in hell they were going to hit that release date.

The prototype has barebones support for multiplayer. The player can create a listen server via the main menu, but the mode itself is quite buggy. The scoreboard uses a simple design that no Source game has ever used.

By default, the prototype has G mapped to the function "DropPrimary". However, when the G key is hit in-game, you will get an "unknown command" error and nothing happens. This is likely a leftover from previous builds, as demonstrated by the Coastline E3 2003 video (around 2:00 in), where Gordon can be seen throwing the shotgun away to pick up the rocket launcher, implying he wouldn't have been able to carry dozens of heavy firearms at the same time.

Firing While Zoomed In

In the prototype, the player can attack while zoomed in. The final game removes this, presumably for game balance reasons.

The "New game" option also has a selection for "Training Room", just like the Steam version of Half-Life. Attempting to start a game with this selected will do nothing, but the console will give an error stating the game is attempting to look for a map called "t0a0". t0a0 is the name of the first tutorial map in Half-Life.

Reading the console right after the game has loaded shows that it's looking for two missing models, "models/shell.mdl" and "models/shotgunshell.mdl". These models were used in the original Half-Life for ejected 9mm brass (shell.mdl) and shotgun shells (shotgunshell.mdl). This does not cause any issues as the game already uses different spent brass models. Why these functions weren't removed is unknown.

There are some leftover files related to Steam, such as files for setting up the server browser and text on the main menu.

The root folder for model textures has several folders that were removed in the final game. They are "Bathroom", "Electronics", "Furniture", "Junk", "Lighting", "Pipes", and "Vehicle".

These folders contain a folder for each texture instead of dumping them all in the directory, like the prototype and final's prop folders do. In addition, the textures are named differently; all of the textures had "W_" (likely meaning "World", similarly to how weapon models are named in Source games) at the start of each one's file name, all of the words in their descriptions are capitalized, and some even have the texture size listed in brackets.

Since there are so few of these and many of the textures in these folders appear elsewhere in the prototype, it's likely they are leftovers from an earlier development period and weren't completely removed for whatever reason when the prototype was compiled.