Generally, all of the NPC models lack the unique animations they have in the final game.

Alyx is similar to her final version, but the "Black Mesa" on her shirt uses a different font and is spaced differently.

The coding and models for the Alyx Gun is in the prototype, but Alyx never uses it. Instead, she uses a regular Pistol in all the maps she appears in.

Inside Alyx's texture folder are textures for an older taken on Alyx, back when she had a futuristic catsuit with a green jacket over it. The model for this model is still in the game. The model is named "predator.mdl" and appears to have been used to demonstrate transparency during the E3 2003 reveal. This older design also appears as one of the ghostly figures that were shown at the end of the E3 2003 demonstration.

There is also a texture of her with lighter skin and red hair, which matches early concept art of her found in Raising the Bar. This texture started out as an 8-bit bitmap and then converted to a 16-bit bitmap, and then to VTF.

Barney is almost the same as he is in the final game. He has slightly different gloves, though.

Dr. Breen's textures are noticeably different in this prototype. His suit is a lighter shade of brown, his face and hair are lighter, and face is less detailed than it is in the final game.

There are some leftovers of an older take on Breen in the prototype. These are textures for a very early version of the Breencast and a statue called "consul_statue", reflecting Breen's old name mentioned in Raising the Bar: the Consul.

The very early Breencast Breen matches early concept art for Breen, while the statue does not.

Inside Breen's texture folder is a texture called "consul_facemap" that is a slightly different version of Breen's prototype face texture. 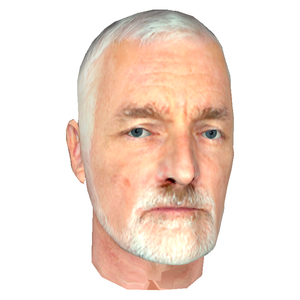 It's possible that this model was used for early prototypes of the breencast, though this is only speculation.

The Citizen looks completely different in the prototype. He wears a tan sweater that has a red City 17 logo on the back, grayish pants, black shoes, and has a C17 armband on his left arm.

There is only one Citizen outfit in the prototype. The final game expands it to four.

Female Citizen models are not in the prototype, but their facemaps are.

There are also some female faces in the prototype that do not appear in the final game. 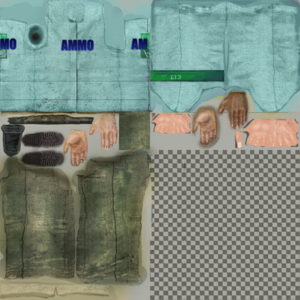 A texture for an "ammo" variant (presumably to give the player ammo) exists in the prototype. This is a blue variant of the prototype's Citizen with green instead of red on him and the world "ammo" in a blue font placed over the "C17" logo on the back.

In the final game, the player is able to receive ammo from regular Citizens during the Uprising portion of the game.

All of the faces used in the prototype are different from the ones used in the final game. They have had details added to them and various changes to their skin color, usually to make their faces darker.

This texture is also used by Samuel, a character model that exists in the prototype's files.

The prototype has four Citizen faces that do not appear in the final game; Trav, Laura, Linda, and Tamm. 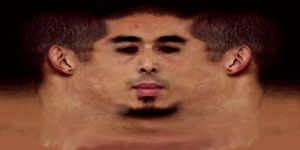 Another set of unused Citizen textures can be found in the Citizen texture folder. They can be identified by having "cyl" in their filename. Citizen models wearing this outfit can be seen in an early pre-release screenshot.

Textures for an early Citizen, called Gasmask Citizen (because they wear gasmasks) can be found in the texture folder "citizen 17". The model for him is missing, but he can be found in an early pre-release screenshot, giving a look as to what the textures would look like on the model.

Interestingly, several of the textures fit on Cohrt, an older version of Kleiner, suggesting that Cohrt was based off of the Gasmask Citizen.

The "extras" folder contains two textures for the Female Citizens.

The textures indicate that they were drawn over renders of Alyx.

The prototype Advisor's markings are less shiny than they are in the final game.

A render of this version of D0G has been found on the portfolio of Travis Brady, the man who made Dog's model.

Eli's model underwent several changes between the prototype and final game. The prototype Eli has a lighter vest, a blue belt, a clean and white shirt, lighter skin, stumpier arms and hands, a less-detailed face, and a Yale shirt instead of a Harvard shirt.

Early voice clips of Eli, back when he was Eli Maxwell, can be found in the game's files. They use a different voice actor from the final Eli.

Textures for an older version of Eli can be found in Eli's texture folder. Eli using these textures appear in a pre-release screenshot, along with the old Alyx mentioned earlier.

The G-Man has several differences in the prototype. Most noticeable is that his suit is a lighter shade of blue than his final one is. His shoes are less detailed and he's also lacking his striking green eyes.

The prototype contains several old textures for the G-Man. Based on their looks, there appears to be two different sets of G-man textures in the files.

The most interesting part of this texture set is the odd tie this G-Man is wearing.

This is the second unused G-man texture set. An early G-Man shown in Raising the Bar can be seen with these textures.

Grigori looks quite different than he does in the final game. The prototype Grigori has a black outfit that invokes the "crazy priest" image that Grigori has, has paler skin, a less-detailed face, and white shoes instead of red.

Additionally, Grigori's textures are separated into individual textures instead of being on one big sheet, like the rest of the characters are. This suggests that Grigori's prototype skin is an old one that hadn't been updated yet.

Doc Kleiner is very close to his final counterpart. The only major difference is that the back of his right leg is a little less detailed than it is in the final game.

Inside the game's files is a model called "cohrt.mdl" (named after the man used for the final Kleiner's face texture). When opened, it is actually an early version of Kleiner with a completely different face. This Kleiner has a much older face and looks less like the Half-Life scientist head that Kleiner is based off of. His lab coat does not have his undershirt and tie exposed. His legs and shoes appear to be bugged, but there are some textures inside Kleiner's folder that might fit "cohrt.mdl". The back of his head has an error, causing the back of his head to look stretched.

While "cohrt.mdl" does not appear in the final game, his head was reused for a hostage in Counter-Strike Source with the back of his head fixed.

"cohrt.mdl" uses an older version of HL2's model format, which means it cannot be loaded by default. However, there is a custom model viewer that can view it.

Textures for a version of Kleiner between "cohrt.mdl" and the prototype/final Kleiner can be found in Kleiner's texture folder. A picture of an early Kleiner in Raising the Bar shows him with these textures.

Mossman is pretty close to her final version, but there are some changes. Her sweater is a light white (instead of a tan color), her shoes use a less-detailed design, and she has more makeup on her face than she does in the final game.

Textures for an older take on Mossman with a blonde bobcut and a blueish outfit can be found in Mossman's texture folder. A picture of this Mossman can be found in Raising the Bar.

The Vortigaunt only has his "slave" equipment on in the prototype. The equipment itself is almost exactly the same as it is with the pre-Episode 2 Vortigaunt.

His body texture is almost identical to his pre-Episode Two texture, with the exception of having a darker and less-detailed eye that does not move.

His voice is completely different from either his original or post-Episode Two voices.

Compared to the Episode Two Vortigaunt

A Cheaple (low-poly model and smaller-resolution texture) version of the Vortigaunt appears in the prototype's files, but not the final game.