The Digger is a large and rectangular vehicle with a digging drill in front of it. It has a gray temporary texture.

It can be found in the prototype's d1_town_02. Based on d1_town_02's design and an gameplay idea for Ravenholm based in Raising the Bar, the player was meant to take control of the Digger and use it to plow through rocks (which are represented with wooden planks in the prototype), then ram the Digger into a Big Momma pod, an object that endlessly spawned Headcrabs that is based on Half-Life's Gonarch boss. However, when the player gets in it, it cannot move nor can the player get out of it, trapping the player. 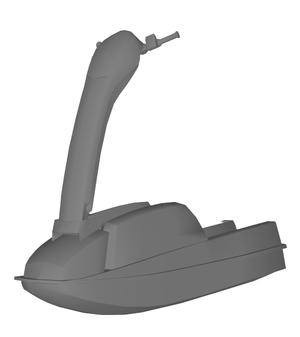 The Jet Ski is an aquatic vehicle. The model has a gray temporary texture. Code exists for it in the leaked source code, which can be re-activated.

According to Raising the Bar, it was the predecessor to the Airboat. It was cut because it felt too similar to being on foot and communicating what direction the player was moving in was difficult with it.

A video of the restored Jet Ski can be found below:

The Airboat has several differences compared to its final version. The prototype version has a different and cleaner texture for the floats at the bottom, lacks the round shape at the back of the boat, a damaged left float, no clamps on the floats, and a texture that is twice the size of the final texture.

The prototype has another Airboat model called Airboat_temp.mdl. It has only one difference between the used Airboat model, it has 3 metal rods inside of each of the floats of which only two can be seen normally. It also has another animation called a_idle which is just a copy of the idle animation.

The prototype Buggy's model is almost the same as the one in the final game. The only noticeable difference is that the gray near the back left tire is shinier and less blurry than the final one.

Gameplay-wise, the prototype is a bit slippier and harder to control than the final Buggy.

The prototype has an earlier version of the Buggy called Buggy001.mdl. This version has a car hood on its front, metal sheets near the back, and lacks the ammo box on the back. It is also tilted to the right side for some reason.

Buggy001 uses an older model format, so it must either be converted to the latest model format or viewed in a model viewer designed to read older models.

Inside the prototype's files is a low-poly Buggy model meant for a removed DirectX 6 mode. This buggy lacks the ammo crate in the back but is otherwise the same as the Buggy in the prototype.