From The Cutting Room Floor
< Proto:Hexen (DOS)
Jump to navigation Jump to search

This is a sub-page of Proto:Hexen (DOS).

Door handles are missing to this metal door texture.

The skull on Chris' headstone was misaligned.

Ben's headstone once had a cat head engraved in the prototype.

The Justifier's conversion to the Wraithverge was reflected late on this stained glass texture.

The final recycles the sound of the mage's Bloodscourge weapon to save 16kb of memory.

Labeled MenuMove. Presumably, this would have played if you moved the menu cursor. 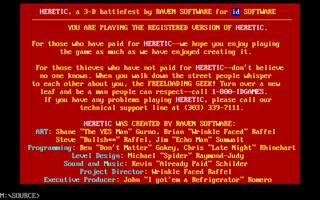