A demo of Jak II that was included on the Official PlayStation 2 Magazine Demo Disc #39. It has a build date of July 17, 2003, although the files are dated June 10, 2003, while the final game is dated August 25, 2003. Like the E3 Demo, the same two missions are playable: "Protect Sig at Pumping Station" and "Destroy Eggs at Strip Mine".

The title screen of the demo has "DEMO" above the Jak II logo. The logo also has a slightly different design compared to the final version.

The HUD is slightly different to the final version.

The pause menu is similar to the final. There are only two options in the demo, "Exit Demo" and "Back". The text is green in the demo rather than light blue in the final version, and it is slightly smaller in size.

The full pause menu can be unlocked with memory hacking. Most of the options are the same as the final, with some differences. The save and load options also do not work.

The menu also has different sounds.

The mission failed screen is mostly the same as the final. It has a different font and text color. 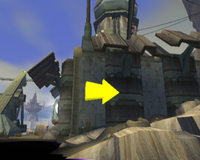 The Blaster has a different shot sound.

The Peace Maker has some differences. It can be obtained in the demo with memory hacking.

The demo uses a different font to the final.

The maps in the demo (contained in WOMAP.STR) are either missing, placeholders or have different designs to the final game.

The complete maps have differences to the final game. They use a differently designed background with Precursor text giving the name of the level (this style of map would later be used for a number of Jak 3 levels). The unexplored areas are marked black instead of blue. Some maps also have additional differences.

These maps were changed for the July 13 2003 prototype before they were changed again for the final game. Only the differences between the two prototypes are documented here.