This page details one or more prototype versions of Kirby & the Amazing Mirror.

Used in the Prototype

The title logo was completely redone. Furigana was also added below the game title's kanji.

The lines surrounding the star have been removed from the final version. It's otherwise identical.

The background in Rainbow Route has been given some slight refinements.

The mirror itself is one pixel lower in the prototype.

Though only viewable when the one present switch is pressed, the colors of the world map are much brighter in the prototype. As may be expected, the locations for other areas aren't present.

The black button became red and the antenna is slightly more visible.

There are no waves emerging from the antenna in the prototype. Kirby's animation for this is also slightly slower than it is in the final.

Unused in the Prototype

Like with the gray version of the Dimensional Mirror, the fully restored Mirror had the lines surrounding the star while closed removed.

Although unused in the prototype, the other areas' mirrors are present in the tileset. It seems Peppermint Palace's mirror graphics were interchanged - The cave version was once supposed to be shown in the hub room, instead of the palace version. Additionally, the cave version has been mirrored for the final game.

Kirby's idle stances and win stances were altered for the final release. The early idle stance can actually be seen in pre-release material.

Three Copy Abilities new to Amazing Mirror have sprites that depict them exiting the hub doors from Kirby: Nightmare in Dream Land: Cupid, Mini, and Missile. Only Cupid's stayed in the final game, albeit still unused.

An unused alternate palette for Heave-Ho Blocks, which are gray in the final game.

Graphics Exclusive to the Prototype 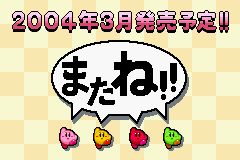 After defeating the King Golem boss and watching the ensuing cutscene, this screen - advertising the game's release in March 2004 - is shown and the game returns to the title screen. The same also occurs if you get a game over.

Most of the game's music is hidden in the game's files. Some of them have various notable differences, documented below:

The Title Menu theme has a quieter bass in the final version.

Dark Meta Knight's theme when attacking Kirby in the intro cut-scene has a different intro in the final game. Its loop point is also shorter in the prototype.

For the beginning area, the prototype uses Kirby: Nightmare in Dream Land's arrangement of Vegetable Valley. The final game instead uses a remix of "Forest/Nature Area".

The theme "Forest/Nature Area" uses slightly different mixing in the final game. The bass is also louder in the prototype.

The prototype's version of the theme "Ruins Area" is lacking some percussion and various intruments throughout the song.

The theme "Space Area" went through the most changes. It's missing an important synth in the beginning of the bridge and at the end of the song in the prototype. The final game also changes the chimes in the bridge of the song.

Dark Meta Knight's vocal synths and trumpets do not sound very good in the prototype, to say the least... Otherwise, they're pretty similar.

The sound that plays when encountering Shadow Kirby is different.

Generally speaking, about half of the objects and enemies are present, of which some, but not all, are shown during the prototype game. The following listed enemies and objects exist in the prototype; the ones in red appear to be unused.

Since the object and enemy IDs in almost all cases match with the ones used in the final game, it seems the developers had mostly finished planning which enemies and objects they were going to implement. There was early work started on things like Boss Endurance and the Warpstar bonus game.

Dark Mind's forms names are numbered 1, 2 and 3, but those were stripped away in the final version.

There's a single unused enemy with only its graphics present at offset 0x00575780 in the ROM, with no leftovers in the final version. Its health bar name appears to be at 0x00774800, reading トッコーン (Tokkōn). No text strings relate to it in the game's data.

It takes an appearance of a wind-up clock toy with floating hands, likely meant to throw music notes.

Only the following abilities can be acquired:

Wheel doesn't show up in the ability roulette but can be acquired from a rolling Golem (in the King Golem battle). There are several differences in the abilities present, compared to the final game.

Fighter is slightly different than what it is in the final.

In the prototype, the standard B attack in the air is the downward kick; in the final, this move was changed to ↓+B, and the B attack was changed to the ←/→+B on ground, but with less momentum.

The ←/→+B in air attack was also given much less momentum in the final.

Stone Kirby in stone form was pinker in the prototype version.

The diadem and spark hair got brightened and refined for the final release. 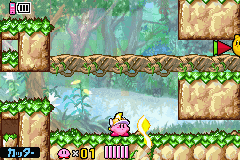 In the prototype, the Cutter Boomerang falls all the way off the screen when it hits a wall; in the final, it dissipates almost immediately.

When driving through enemies, the game uses "punching" sound effects that would later be used for the Fighter ability.

The following abilities cannot be acquired outside of memory editing:

Most of their moves have been removed for this prototype.

Despite not being obtainable, U.F.O's moveset remains in the ROM. While it more-or-less works fine, its graphics do not load properly. However, its beam and projectiles do load, albeit with some minor graphical issues.

Despite being very similar to its final version, the Chain Beam disintegrates with a neat effect halfway into the animation in the prototype. This is most likely unintended behavior due to U.F.O loading sprites that it shouldn't be using.

Kirby's arm is animated in the prototype while performing a Vulcan Jab. In the final game, Kirby's left arm disappears, while motion effects are shown in front of him.

Not only that, but Kirby also has an extra pose in the prototype for the ending lag of the move.

Aditionally, Twinkle Star's effects are smaller and less detailed in the prototype. The animation alternates between a big motion effect followed by a thin and small motion line. Please note that the black background was added for better visibility.

Early sketches of the instructions and ability descriptions displayed on the pause screen exist in the prototype. These can only be accessed by editing your current ability at 02020DFF and then pausing. Despite some of these versions going unused in Amazing Mirror, finalized versions of these sketches had already been showcased in the preceding game Nightmare in Dream Land.

The penultimate room of Rainbow Route is different in the prototype; a long horizontal room instead of a vertical room. It is no longer present in the final game.

As long as Shadow Kirby hasn't disappeared, you won't be able to descend into the pit on the left side of the room. This has been fixed in the final game by moving the screen to the right, so there is no pit to fall into.

The background used in this room is surprisingly more fitting in the prototype. It may have been changed so that the bosses in the background could only be seen in the hallway before the boss itself, which was not present yet.

This Golem activates when approached from the right in the prototype; it activates from the left in the final. The switch below is also not present.

King Golem is located a few pixels further to the right and the ground is lower in the prototype.

This chest with a cherry inside is replaced by a standalone cherry in the final. Probably removed since it would be much more convenient to just get the food rather than watch the chest animation.

In other places, the prototype lacks some chests that the final game has.

Similar to the build dates in each of the retail versions of the game, this version's build date can be found at 0xA2BF78 in the ROM: