This page details one or more prototype versions of Kirby Squeak Squad.

This kiosk demo of the US version of Kirby: Squeak Squad was used by Nintendo in stores to demonstrate the game here.

This demo is just the final version of the game but a time limit which ends after 8:30 minutes,

according to address 0226202c. Freezing this address to any value can bypass the limit and play the demo in its entirety, but players cannot play any levels beyond World 2.

Because it's just the full game but with a time limit, so it work basically the same or it is very similar to the one used by Nintendo at e3 2006 here and GC 2006 here here but these version are from an earlier build of the game. 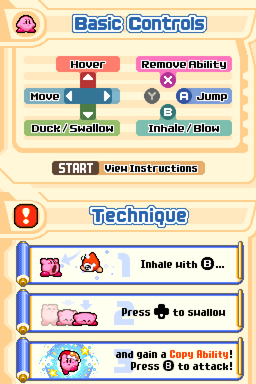 In the demo version, a "basic controls and usage of Copy Ability" screen showed before playing the actual game.

In the third room of the first level, there are two additional enemies that don't appear in the final version: A Sir Kibble and a Bronto Burt.

Thanks For Playing Screen 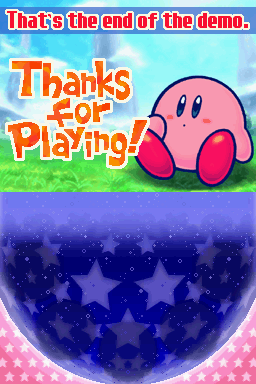 This screen is displayed after losing all your lives, reaching the time limit, or defeating Mrs. Moley in World 2 see here (in case the address is frozen).