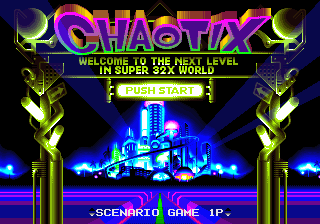 Prototype 1207 is the earliest available build of Knuckles' Chaotix, compiled December 7, 1994. It was released by drx during the February 23, 2008 proto release; on Kega a special savestate (provided) below is required due to the "SEGA!" chant being messed up by the driver.

The Sega screen uses a promotional image of Newtrogic High Zone, the final changed this to the Game Over/Level Beat screen instead. The Sega logo lacks the "TM" and instead of zooming in, the Newtrogic High image fades to black, leaving the Sega logo in the dark for a few seconds.

The title screen is in a somewhat preliminary state:

The save menu is in an earlier state than the title and is very buggy:

Incredibly bare bones at this point; there's an empty slot after Knuckles (likely meant for Tails, see below) and the player has the option to choose Heavy and Bomb, which are only Combi Catcher characters in the final. 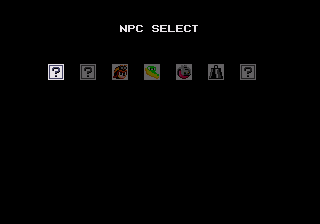 The Combi Catcher is even more barebones, not even a level; instead, whenever the player exits the hub to the right, this screen pops up; the first question mark is Mighty, the second question mark is unselectable (again, likely Tails) and the third question mark is Espio; upon selecting your partner, a level select popup.

A strange oddity occurs in this prototype. Normally, selecting the "TIME ATTACK" option on the title screen brings you to the prototype's usual rudimentary character select menu and the "ATRACTION SELECT" screen. But very rarely, for reasons still unknown, selecting this option will occasionally boot into an unused menu specifically for "TIME ATTACK". Further revisions of the game would gradually remove/improve the "TIME ATTACK" option and ultimately replace it with the "TRAINING" option. Given the difficulty of triggering this screen, which seemingly just relies on luck, patience and a lot of rebooting, included is a working savestate of the screen.

As of the 1207 build, however, this alternate screen still exists, and contains some differences from the final game, and differences from later revisions. It contains a functional level select, with alternate level names, and what seems to be a simple graphical mockup of the results screen.

What's interesting is that one of the names listed on this results screen mockup is "NUTS", a name that doesn't seemingly correspond to any character. Speculation exists, but is unprovable and thus not suited for the article.

Supporting the idea that this is simply a graphical mockup is the fact that while character name strings in plain ASCII exist in this early ROM, there are no corresponding text strings for "NUTS".

An unused portrait of Isolated Island in the style of the other portraits. Used in alternate Time Attack screen.

The end of level sign is completely different and only has a 2D effect.

Graphics for a device in Techno Tower. It only seems to open the hatch when you approach it, but you can't interact with it at all.

Graphics for the seven small animals first seen in Sonic 1, albeit with a discrepancy compared to their depictions in earlier Sonic titles: the rabbit (Pocky/Johnny Lightfoot), seal (Rocky/Joe Sushi), and chicken (Cucky/Chirps) are usually all depicted using shades of grey. The rabbit and seal use shades of blue here to approximate a similar appearence, but for whatever reason the chicken has been drawn using the palette's orange/brown shades instead, resulting in a markedly different appearance. Ricky is used in the 1227 prototype, released when defeating a certain badnik in Amazing Arena.

Graphics are in the ROM for Sonic and Tails monitors. The image above uses a palette that was unused in Sonic Crackers.

There is an empty space in the character selection menu following Mighty, who originally was Sonic. This space is believed to originally be reserved for Tails - the palette above is assigned to the character in the slot after Mighty, and contains many colors that were used in Crackers for Tails. In later Chaotix protos, the palette still exists but the character's palette pointer points to Mighty's palette instead. While most other characters in Chaotix use 18 entries + a transparent color for their sprites, this one only has 15 + transparency, indicating a leftover from earlier in development.

To properly play as "Tails" in this prototype, change the bytes at address 0x16060 from 03 CC to 04 F4. Notably, there are many things here that don't exist in future builds: "Tails'" animations are very different, and he jumps much higher than later builds' "nulled-out traits" versions do. Unfortunately, "Tails" has a tendency to crash the game a lot, including on real hardware and in Kega Fusion. Currently, the most stable emulator for playing as "Tails" is Gens, however, the proto itself is very unstable in that emulator.

Present at 0x6E1E is a small sound driver string. A partial version remains in the final ROM.

Present starting at 0x3DC30 is the diagnostic menu text from the 32X After Burner.