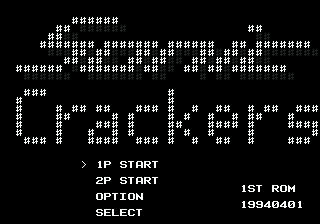 Sonic Crackers (referred to as "Sonic Studium" in the ROM header, and often identified incorrectly as "Sonic the Hedgehog 4") is a very early prototype build of Knuckles' Chaotix, incorporating many of the elements that would appear in the final game. It also has a peculiar ASCII-art title screen, which looks like it was thrown together in 5 minutes. Sonic Crackers is thought to be an engine test, composed of different game engines swapped out using RAM coding.

The game stars Sonic and Tails, held together by rings as seen in Chaotix. Sonic can also pick up Tails and throw him up to make it easier to reach higher platforms. The stages and music are also similar to those in Chaotix. There are no sound effects at all during gameplay and no Badniks to be found, although there are spikes and you lose rings when hitting them (even though you have none).

The date on the lower-right of the title screen reads "19940401", which led to much debate on if the title screen or the ROM as a whole was an April Fool's joke. The discovery of the Chaotix prototypes, especially 1207, proved that this was not the case. Also, when viewing the ROM through a hex editor, the date "JUL.1994" can be seen, which would suggest that a bit of work had been done since April. A set of unused graphics found in a prototype build of Yuu Yuu Hakusho: Makyou Toitsusen (dated June 1994) indicates that later development included creating more Field sprites for Tails.

Much later, various graphics from Crackers were used for Egg Gauntlet Zone in the 2013 Sonic 2, although the Zone was never normally accessible and both it and its assets were later removed.

There are four playable levels, which are accessible either by pressing Start on "1P START" on the title screen or by using the "SELECT" menu.

Standard sidescrolling levels similar to those seen in previous Sonic games. By pressing Start and using the D-Pad, you can move Sonic and Tails anywhere in the level (although Sonic and Tails' arms and Tails' tails become detached and stay at the original location until the game is resumed).

An industrial-themed level thought to be an early version of Chaotix's Techno Tower. This is the only level with an obstacle which causes harm to the player (spikes), which makes this the most complete level of this build. The palette and music changes each time the level is entered, which indicates that time of day was already planned at this point complete with four different themes, themselves early versions of Chaotix songs (Walkin', Hyper-Hyper, Evening Star, and Moonrise).

When the timer reaches 3 minutes, or when the top of the level is reached, the Game Over sound plays and a Field level is entered.

A circus/carnival-themed level which, rather than having a definite end, loops. The collision detection is glitchy and makes the floor difficult to walk on when entering the normal way. Each time the level loops, the collision gets more and more broken. The best way to play it is by entering it using the Level Select, which will make the ground solid (Tails seems to be able to walk on the ground without any trouble, though). The characters' arms and Tails' tails will glitch sometimes when they are on slopes.

If you go far enough with debug mode, strips of garbage data spawn at the bottom of the level.

The music of this level is an early version of Electoria, and Game Over activates after 1 minute. You cannot die from falling into a pit, and are simply stuck there unless there is garbage data or you debug your way out.

No work has been done on these. Trying to enter them shows the title card and plays the World 2 music for a few seconds before immediately giving you a Game Over and beginning a Field level.

A pair of incomplete overhead field stages, commonly referred to as Special Stages even though they aren't (the "Special Stage" selection on the Level Select menu causes the game to crash). These levels are very incomplete and don't have any collision detection.

The music is an early version of Electoria. To exit these stages, simply pause and hit any button. The game will then load an attraction of the world it is on.

This prototype will crash on a real Mega Drive/Genesis console, but only if the player does not skip the SEGA screen quickly enough or stays at the title screen for too long. The cause of this is due to the sound driver (which is held on and controlled by the Z80 sub-processor) - if it isn't given a music track ID to process quick enough after being set up, the game will fail. To fix this, open the ROM in a hex editor and go to offset $0052B7, then replace 21 05 1C 7E with 11 00 00 00.

When bypassing the crash stated above and obtaining access to the other selections in the menu, the game can crash in the Level Select option named "SELECT". When selecting the "PREMIUM1 - ATTRACTION" selection, the game crashes with a plain blue screen. The same happens when selecting "PREMIUM1 - FIELD", which will lead to the World 2 Field stage first, and will happen upon pausing and pressing A.

The ROM header says the game is named "Sonic Studium", as opposed to the "Sonic Crackers" on the title screen.

The ROM header name should be "Sonic Stadium". This is due to a mere transliteration error into Japanese, where it became スタジアム (sutajiamu). Japanese has no "di" syllable, so "ji" is used in its place. The short vowel "a" in Japanese is pronounced as in the English word "father". As such, スタジ would sound very much like the English word "stud". An excerpt from the Sonic Mars script shows Sonic Stadium as a title under the "Future SEGA" products category, along with Sonic 3+. The 1207 Chaotix prototype has unused graphics spelling out "Sonic Crackers S32X", indicating that the "official" name was changed after "Mars" became "Super 32X".

Similarly, the name on the title screen (and by extension in the aforementioned Chaotix graphics) should be "Sonic Clackers", though Japanese doesn't distinguish between L's and R's. As a result, the name is a result of a cyclical transliteration error (Sonic Clackers -> ソニッククラッカー -> Sonic Crackers).

While sound effects are present, they don't play.

As previously noted, the music of Crackers is early iterations of Chaotix songs. The exception is this game's Game Over tune, due to Sega not actually owning the Sonic 1 soundtrack.