A prototype of the PS2 version of LEGO Star Wars: The Video Game was released by Hidden Palace on March 20, 2021 as part of Project Deluge.

Dated January 10, 2005, this appears to be a pretty early build. Despite this point in development being only three months from release, it contains a lot of debug features and even has the unused Anakin's Flight level fully intact. It also features plenty of differences compared to the final build.

A fully functional debug menu is available at any time in the pause menu, labeled as LEGO Options. 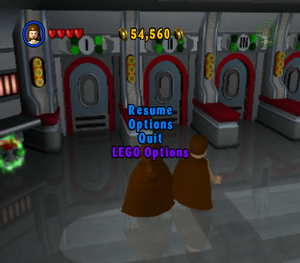 "LEGO Options" in the pause menu. 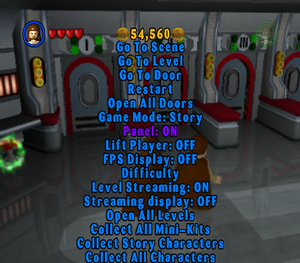 The famous cut level Anakin’s Flight is fully playable in this prototype build. All the level's cutscenes that were touched up and finished for LEGO Star Wars: The Complete Saga are here and accounted for, albeit unfinished. It can played through its own door in Dexter's Diner or through the debug menu. Playing the level through story mode will spawn the player at the very last scene of the level, labeled as "Anakin_E" in the game's files. However, using the debug menu allows you to see the rest of the level as it was originally designed.

The level even has its own Mini-Kit set that is completely removed in the final build due to the level's removal. Though there are no LEGO Canisters that spawn anywhere in the level itself, and thus it can only be seen by unlocking all the Mini-Kits in the debug menu. 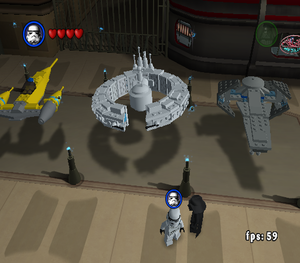 Droid Control Ship Mini-Kit as seen in the outside hub.

Differences from the Final Build

The shop in the Dexter's Diner hub had completely different things for sale, including Hearts and default Blasters (a bit redundant considering a lot of characters already have one), items not purchasable in the final build. In fact, nothing in the shop is actually purchasable besides characters. Dexter himself lacks any animations and the entire shop menu is very clearly a work-in-progress.

Extras as seen in the final game haven't been implemented yet at all, and the extra Blasters (Bigger, Classic, Silly) have early models attached to them.

Darth Sidious has an early design and early animations. He has a skin tone that resembles his first official minifigure from the year 2000, and he also borrows animations from other characters in this build instead of having his own unique ones. His icon also reflects his early design.