This page details one or more prototype versions of Lunar: Eternal Blue.

A self-playing demo of Lunar: Eternal Blue, most likely intended for store kiosks, came out shortly before the game's Japanese release. It was apparently assembled during mid-late development, as it exhibits quite a few differences from the final version; the files on the disc are dated October 19th–20th, 1994, versus November 15th–29th for the final.

The demo is non-interactive; it consists of a mish-mash of the more impressive-looking cutscenes spliced together with gameplay demonstrations and advertising copy. Unfortunately, it was largely gutted of unnecessary resources, so there are only a handful of maps and cutscenes to look through. There's still quite a bit of interesting stuff, though!

One of the most noticeable differences is the "party follow" behavior. In the final, the party members follow behind the leader in a line, like in Lunar: The Silver Star, but in the demo the members fan out behind the leader in a "marching formation". The followers are much more autonomous than in the final, and can take some interesting routes in order to get around obstacles.

While the idea is interesting, playing around with this behavior with the demo's autopilot removed makes it pretty obvious why it was scrapped: party members can easily get stuck in crevices and separated from the rest of the group, which (aside from looking ridiculous) causes problems when they need to be moved around for scripted events. Perhaps if there'd been more time to fix the bugs, this feature would have made it in.

Though the demo only displays six portraits (on the screen listing the voice cast), it contains twelve in total; the rest were either removed or not drawn yet. All of those present were altered for the final release, some quite dramatically.

Note that these are actually displayed with a slightly brighter palette in the demo, but that's probably just an artifact of how they're embedded in a cutscene; the palette used for most portraits in the final version is also present in the demo. (The format of the portrait data actually differs between the demo and the final; the demo expects portraits to be drawn from a fixed palette, whereas the final embeds a palette – in many cases a copy of the demo's fixed palette – with each portrait.)

Note that the duplicate Hiro portrait from the final is also present in the demo, and was altered the same way as the used one.

The inventory icons (items and spells) aren't shown in the demo, but they are present. They clearly weren't finished yet: Out of the game's 241 icons, only 43 remained unchanged from demo to final. The rest were all altered to some degree or another.

Of the game's 191 items, 149 of them have a different icon in the demo. Most icons had their shading adjusted, at a minimum, while others were replaced entirely. See the images below for all the alterations, but here are some highlights: 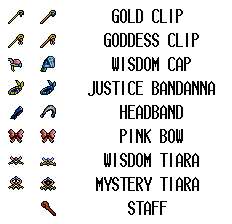 All 49 magic icons were redrawn for the final. Most of them are just cruder or simpler versions of the final icon, but a few are more interesting: 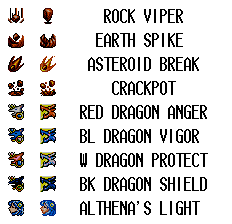 The text uses a different Japanese font; most characters are thinner than in the final, and a few extra kanji are present. Most likely it's copied directly from Lunar: The Silver Star.