This is a sub-page of Proto:Mario Kart: Double Dash!!.

A demo of Mario Kart: Double Dash!! was released on Interactive Multi-Game Demo Disc Version 13. There's a bunch of unused graphics and differences hidden in this demo.

A debug menu can be accessed, allowing the user to select different options. A similar menu exists for the European version.

The player can select up to 8 players, the race mode ("TimeAttack," "GrandPrix," "Versus" and "Battle." Setting the player count to 2 will disable "TimeAttack" and anything above will also disable "GrandPrix.") In "Battle," there are four modes:

In addition to what appears to be an early course order, there are a total of 27 test maps listed, as well as 8 "Mini" courses (likely the Battle Courses) and 8 "Rev" courses. 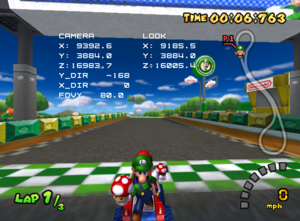 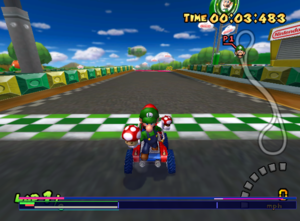 Shows some bars at the bottom.

The title screen is brighter in the demo, the options are larger, and the registered sign was changed to a trademark in the final. The render itself has Peach's head tilted slightly and Bowser's shell (the one in his hand) having a different orientation.

The driver icon, kart stats, and character names aren't shown for some reason. Also, the player box is scaled down.

The demo uses the blue All-Cup Tour background instead of the retail's green background for Mushroom Cup.

Mario's Circuit was originally in the Mushroom Cup. 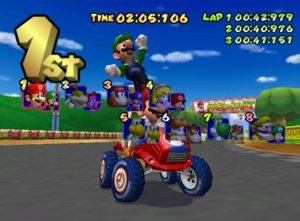 The race results in the demo are similar to those in Mario Kart 64.

The game resets back to the Demo Disc Menu after the race.

It seems like a Reverse Cup was planned, making the player race the tracks backwards. This also indicates that in LANPlay.arc, Yoshi Circuit, Dino Dino Jungle, Peach Beach, and Mushroom Bridge (coname_yoshi_circuit_r, coname_dino_dino_jungle_r, coname_peach_beach_r, and coname_kinoko_bridge_r) have text for it in Japanese. The "r" most likely meaning "Reverse". This would eventually become a reality in Mario Kart Tour.

A model exists for the Reverse Cup gold, silver, and bronze, found at AwardData\Award_Reverse.arc.

Retrieved from "https://tcrf.net/index.php?title=Proto:Mario_Kart:_Double_Dash!!/Multi-Game_Demo_Disc_Demo&oldid=1277801"
Categories:
Cleanup > To do
Subpages