Proto:Mario vs. Donkey Kong 2: March of the Minis

This page details one or more prototype versions of Mario vs. Donkey Kong 2: March of the Minis.

This playable demo of Mario vs. Donkey Kong 2 is the one broadcast from DS Download Station: Volume 3 stations.

Besides the lack of other menu options (it is a demo, after all), the Main Game button is much different. The Mini-Mario heads are arranged in a small cluster rather than a column, and the text is displayed below the button in a standard font rather than being part of the button graphic. The bottom also makes no reference to using the Nintendo Wi-Fi Connection. The top screen is identical to what is seen in the final version, except the transparent pixels in the Mini Mario sprites are blue, instead of black.

The interface for the level select screen was completely redesigned between the time of the demo and the final release. In the demo, the level buttons are placed in a separate blue panel that doesn't fill up the bottom screen, with the background showing through behind it. The top screen only features the name of the Floor in a rather plain black bubble, and has no life counter or spots for the collected cards. Mushroom Mayhem is called Mushroom Kingdom in this demo, and features a different background. The design is similar, but only has one tree layer and a sky with no visible horizon. The sky gradient is also flipped.

The game screen was also redesigned between the time of the demo and the final release. In the demo, the cards are placed inside a grey-blue panel and the timer and block count are below the panel. The background features larger Mini Mario heads than the final, and displays all the score calculations in real time, rather than at the end of the level. 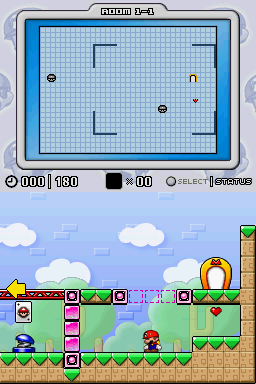 A map can be accessed by pressing Select, but it doesn't include the terrain or Cards. A map was later (fully) implemented in Mario vs. Donkey Kong: Mini Land Mayhem!

The final version is much higher in pitch.

The coin graphic is based on the one from New Super Mario Bros..

The demo proper contains 6 levels, with 3 left unused. The layouts were mostly finalized at this point, with the exception of 1-1, which got a complete makeover in the final version.

There is no folder or file like this in the final game.

In the final ROM, the name of the "DATA" folder in the root of the file system isn't capitalized.

The game is more enthusiastic in the final. This text isn't used in the demo as you cannot access any boss levels. 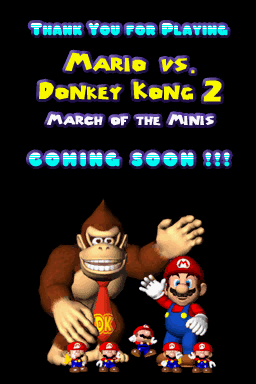