The main platform surface graphics were altered from looking like snow in the sample to looking like ice. The background has several of the trees shuffled and the size of one altered.

Notice that the final version darkened the palettes of the cave walls. More detail to the walls was added as well, such as the dark blue pillars and rocky indents.

The difficulty of this section was toned down for the final version by making the two jumps in the middle of the room easier to make. As a result, one of the Icicle Tekus was removed. Some of the platforms were changed to have icy surfaces. The large weapon capsule isn't present in the sample version, as they weren't programmed in yet.

Machinery was added to some of the rocky walls. The caves have added detail to them as well. The dinosaur skeleton was modified from an odd purple color to tan.

Since this is a demo, and because the item wasn't coded yet anyway, the H circuit plate is an extra life in the sample.

Aside from the usual background touch ups, a layer of ice was added to Sniper Joe's platform for the final version.

The largest change to this stage, it's a lot easier to get through this section in the sample version. There's no reason not to take the higher path in the sample, but in the final version the top path leads to the Rush Search item and is more difficult to traverse. A wall was added to the top of the path, and the White Bear Machine room now has spikes on the floor.

The Kerone robots found here were replaced with Driver Cannon enemies, and the large energy capsule behind the White Bear Machine was changed to an E Tank. 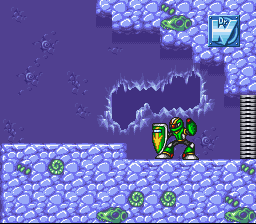 The last section of the stage is pretty much identical, save for a Sniper Joe near the boss shutters that only appears in the sample version.

Yet more palette darkening. The final version also adds two more waterfalls in the center of the background, as well as giving the water a cool glowing effect. A few swirls were added to the pillars and the caves and waterfalls in the back were moved around.

The dark sky seen in the last section of the sample version was brightened a bit for the final.