This is a sub-page of Proto:Mega Man X3 (SNES)/August Prototypes.

The Cx4 chip test screen seems to have been disabled as holding B lets the game boot normally – although the music will be muted until a game is started. In the final game, holding B after the Cx4 chip test still mutes the music, but only until the gameplay demo has run.

There is also no copyright screen here. It instead goes directly into the Capcom logo.

The city in the background is colored and arranged differently, and the towers also sit a little lower in the August prototypes. The clouds at the top of the leftmost/rightmost building were moved up in the final to accommodate this, as well as having their formation slightly adjusted. In addition, there are two spotlights instead of one, but both are completely non-moving, opaque, and extend from the towers rather than the red building to the right. Though not really noticeable, the background is also two pixels shorter than the final version's.

Maoh the Giant's animation freezes with his arms bare in the August prototypes instead of covered with electrical current graphics as in the final. The black box containing the text is also larger in the August builds.

The Spycopters and lasers are much faster in the August versions. There's also no speed variance, despite the difference in perspective.

There are periods missing on all lines narrated statements aside from the line before the Spycopters attack and the closing line of the intro. However, any other punctuation (ellipses, exclamation marks, commas) are there.

The beginning of the title screen music is three times as long, repeating as a rising melody before it kicks in to the main part of the song. Appropriately enough, the wireframe "X" takes a little longer to dock on the logo. It's also worth noting that the music cuts off just a little bit earlier than it should before the demo runs.

The only visible difference between the August prototypes' title screens and the released version is a simple bit of text identifying the sample's build date.

There are also no sounds on the menu aside from X firing, just as in Mega Man X2.

The "Pass Word" option is not selectable in the August 23rd prototype as the X icon can only move to "Game Start" and "Option Mode".

The gameplay demo seems to break under unknown circumstances. This will sometimes cause X to not climb down the first ladder or occasionally get destroyed by a Notor Banger. This happens on very rare occasion in the final game, but happens very frequently in this version.

In another scenario, the gameplay demo completely breaks, attempting to start not from the front door of Maverick Hunter HQ, but from the Spycopters cutscene, causing glitched graphics and placing X in the far left of the screen. The demo ends shortly after X lands.

The "Pass Word" mode is disabled in the August 23rd prototype, but can still be accessed by forcing the cursor onto the option via Pro Action Replay code 7E003C01.

While the password screen is fully functional, no passwords from the final version are accepted. However, all passwords from Mega Man X2 will work and give X the appropriate items, including a non-functional version of the Item Tracer weapon. (Presumably, the Zero part modifiers instead keep track of whether Bit, Byte, or Vile have been defeated.)

In all versions, using an invalid password on the Pass Word screen displays a picture of Dr. Doppler while a valid password displays a picture of Zero. In the August versions, however, both images use the same incorrect palette and are cropped to the same size as the password error/confirmed graphics in Mega Man X2 (32×24 pixels) rather than the final version's 32×32 pixel graphics.

Like in the intro cutscene, the background uses a different palette and the spotlights are baked-in graphics.

In the final version there are two windows instead of three, and they're both wider and broken. The two small energy pellets were removed, since X will always be at full health after the Mac boss fight. 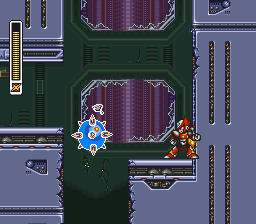 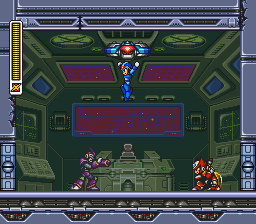 In the final version it has only 5 HP, so it'll go down in two Z-Buster shots or one half-charged / charged shot. 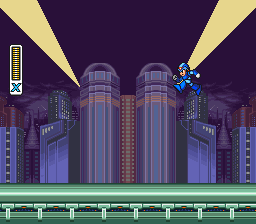