The E3 Version of the game.

The player can use X, Zero and Axl to fight against Spider and Wild Jango in Central Tower. There are 9 Vaccine Programs and 9 Backups available and Sub Tanks are at 300% energy. The player can not pause and Hyper Mode is not available. After defeating Wild Jango or dying, the demo ends with the message "Mega Cool Timez - Coming Your Way 2004!".

The introduction video appears to be from an earlier version of the demo, as the Action Trigger is different. Some details are not present in the final.

With the use of some cheat codes (and an emulator), one can load a variety of debug menus on-boot.

While the game is booting up, press and hold one of the following buttons:

If you wait long enough on each menu without giving inputs, it can occasionally reboot into a different menu. 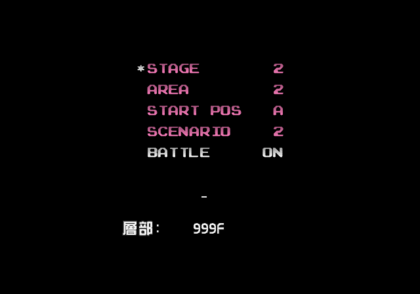 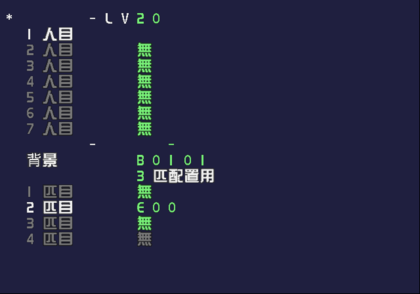 This loads a sample match with user-defined enemies, players, and stats.
The Top Half of this screen is your party and their level.

On the Bottom Half of the screen there are 4 usable pages. You can access pages 1 - 4 by pressing Right on the - in the middle of the screen. 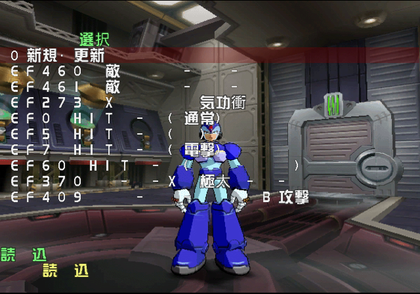 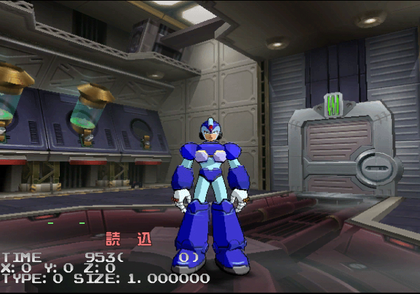 The Model Viewer menu has 3 pages.
Page 1 is a selection of Models and Effects.
Page 2 gives information about the camera coordinates and timing and size of the displayed Model or Effects.
Page 3 duplicates some page 2 assets, but its purpose is unknown.

If loading anything via the debug menu, many characters, abilities, items, doors, etc will not function properly.

Wild Jango and Spider are the only bosses fully programmed.

A large majority of enemies are not programmed completely.

Nana can bring you to the deployment menu as well as transport you to the Sky Room.

Almost every item you pick up in a stage is a Null item or Vaccine Program or LE+. 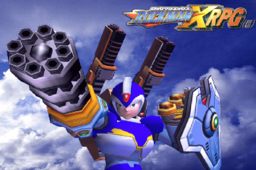 The game contains a screen with the temporary title "Rockman X RPG". X is equipped with a Gatling buster (which is different from the Gatling Buster in the final), a shield, and two shoulder cannons, suggesting the game would originally have Sub Weapons visible in the character equipped with them and shield equipments. In the final, Sub Weapons are not seem in the character using them, and the Defend option makes characters go into a defensive position and a barrier appear in front of them.

The Chapter 2 title card is the only one present in the demo, having a different appearance.

The mugshots from the menus in the demo are much bigger than the ones in the final version.

An early version of X's mugshot.

The prototype is missing many icons from the turn HUD present in the final, and most have a different design. As the player only uses three characters and faces two bosses, the icons for enemies and the other playable characters are unused.

The FME (Force Metal Energy) was originally called DNA in the demo. The menu also had a few minor changes.

The position of the icons in the item menu was different in the demo, and the icons for Force Metals and Key Items had a different appearance.

The cards in Spider's Action Trigger have a simple design, and their back side resemble a spider web with a red background. In the final, the back side is golden and has the same symbol from his clothes, and the J, Q and K cards have the characters Aile, Nana and Chief R. 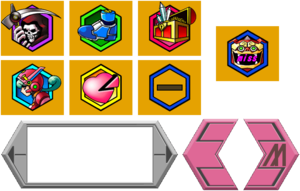 There are two versions of Marino's Action Trigger in the demo, one with black and white images and other with a black background. Both have the same slot.

The demo has chapter titles with temporary names. Except for Chapter 2, all chapters have different names from the final version, like Chapter 4 being "Force Metal Generator" and Chapter 10 "Irregular Hunter". There are also other two unused screens, one saying "DNA Chip 『________』 Get" and other asking if you want to save game data. All screens have an early version of the game's logo.