This page details one or more prototype versions of Metroid Prime Hunters.

Metroid Prime Hunters: First Hunt was a demo released in 2004 as a pack-in bonus with the original Nintendo DS. This demo has a massive amount of content that is not present in the retail version of the game.

The icon is completely different. It's a picture of Samus with "Metroid" on top of it in the prototype, but it's a Screw Attack symbol in the final game.

This weapon is Samus' primary and iconic weapon that you start with in the game. In the demo this beam uses rechargeable universal ammunition as a source in order to efficiently and consistently maintain a moderate fire rate, when the ammunition is depleted Samus will fire slower shots until she is able to gain more ammunition. This was a drastic change as the rest of the Metroid series allowed players to use the Power Beam freely without having to worry about ammunition. When firing the beam it acts like a charged shot due to how much damage it does on various enemies and how it impacts when shot on walls or objects. 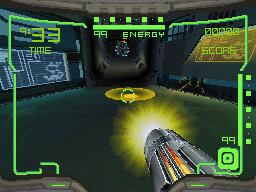 This is one of Samus' secondary and other iconic weapon in the game. Missiles help Samus take out enemies faster than her normal Power Beam can. Unlike the Power Beam, Missiles have an area of effect (AOE) blast radius that can take out multiple enemies at once, or damage ones near others, if they are close enough to each other. When using the Missiles, Samus' Arm Cannon splits into four panels making an "X" shape at the end of her cannon. In this demo, the Missiles use the universal ammunition pool whereas the retail version the Missiles utilized its own ammunition pool. In order to enable Missiles, you have to find and obtain a Missile Expansion Pack in either Regulator Mode, Survivor Mode, or any of the multiplayer maps. Using cheat codes is also an option to enable/obtain the weapon.

A very unique weapon that didn't make it into the retail version nor any later Metroid game. The Electro Lob is a mix/hybrid between the Volt Driver and the Battlehammer sub-weapons. When firing the Electro Lob you will be presented with a green arcing ball of electricity, similar to that of a grenade launcher. Just like the missiles, this weapon has an area of effect (AOE) blast radius that can take out multiple enemies at once, or damage ones near others, if they are close enough to each other. When switching to the Electro Lob, Samus' Arm Cannon doesn't change visually at all, not unless you switched from Missiles of course, which by then the four panels close back up and result in her default Arm Cannon state (visually speaking). The Electro Lob has the ability to scramble one's ability to see, allowing the opponent to take advantage of them while they visually struggle for a short period of time. This weapon can only be obtained in the Assault Cradle and Trooper Module multiplayer maps as Electro Lob Expansion Packs. Using cheat codes is also an option to enable/obtain the weapon. 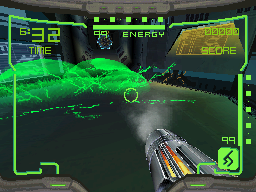 This is not considered a separate weapon but more of an upgrade to the Missiles. Grabbing two Missile Expansion Packs will enable the ability to use charged missiles. The damage of charged missiles is slightly greater than that of a normal missile shot. This allows the area of effect (AOE) blast radius to be slightly bigger on impact and increases the homing ability. This is very powerful in multiplayer against players, however it can be costly as well with ammunition. When firing a charged missile you lose 15 of your universal ammunition, thus making it easy to run out quickly if you rely on them too much. You can acquire two Missile Expansion Packs in Regulator Mode or any of the multiplayer maps. Using cheat codes is also an option to enable/obtain this extension. 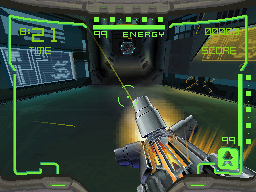 This is not considered a separate weapon but more of an upgrade to the Electro Lob. Grabbing two Electro Lob Expansion Packs will enable the ability to use the charged Electro Lob, which looks similar to the Volt Driver when charging. The damage is not any different than that of a normal Electro Lob shot when charged, however this allows you to shoot a shot straight rather than the usual arc effect, this makes it easier to hit enemies from long distances. When firing a charged Electro Lob shot you lose 10 of your universal ammunition, thus making it easy to run out quickly if you rely on them too much. You can acquire two Electro Lob Expansion Packs in the Assault Cradle and/or Trooper Module multiplayer maps. Using cheat codes is also an option to enable/obtain this extension. 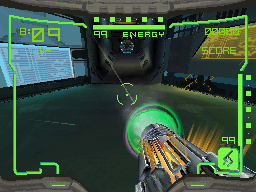 You automatically start with bombs acquired in every mode, including multiplayer. In the demo you can only lay three bombs at a time and have to wait a short period of time before laying three more. These are very powerful against enemies, however they are very weak against players in multiplayer, this led to a buff to them in the retail version of the game. You can bomb jump with these bombs if you apply the Prime series' concept of bomb jumping. 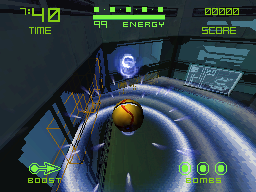 This is not a power-up but an effect that the player can receive via self harm or from a player in multiplayer by the Electro Lob. When receiving this status condition you are unable to see clearly for a short period of time, allowing the opponent to take advantage of your blind state. This also scrambles the map as well making it somewhat harder to know if you moved from one spot to another at that point in time. 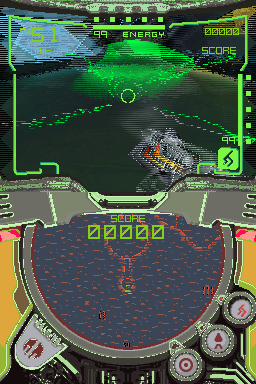 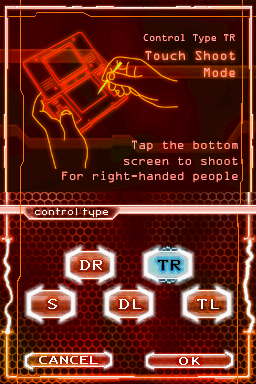 A basic control type for Samus, with a Touch Shoot Mirror Mode for left-handed players. The Top Screen and Touch Screen show the map and gameplay, respectively.

Samus is moved with the D-Pad. L jumps, while X, Y, and A change between the Power Beam, Missiles, and Electro Lob. B toggles the Morph Ball.

Tapping the Touch Screen will shoot the equipped weapon at the location the player tapped, which makes it easier to shoot enemies. However, in order to move the camera, you have to touch the Touch Screen and move the stylus around on it; this, along with it being somewhat clumsy to use the stylus and A-B-X-Y, is probably why the control scheme was left out of the final.

After completing every mode in the demo, a cutscene plays with some possible early design silhouettes for the antagonists. The URL displayed at the end, "http://www.metroidhunters.com", was later replaced by a redirect to Nintendo of America's website, and the domain was ultimately relinquished and is now owned by an unrelated entity. The original website can still be accessed here through the Internet Archive.

An unused error menu screen that pops up when you manipulate with a certain byte in the RAM. After changing the byte and pausing the game, you are left with this error menu screen. The "Pause" banner that usually sits on the Top Screen when pausing the game is no longer there. Your only option is to choose "Okay" and get kicked back to the title screen.

The text strings "ARM CANNON" and "VISOR: sight-enhancing apparatus_" were removed from the European verison.

The text "Connecting to database..." was also removed from the European version.

Several changes were made for the European version: "Del" was changed to an arrow pointing left, while the three buttons marked as "Upper", "Lower" and "Char." were changed to "ABC", "abc", and "123".

The text box was widened for the European version to allow for the somewhat wordier translations of this string used in non-English languages.

The font seems to be taller in the US version.