This page details one or more prototype versions of Might and Magic IV.

In 1992, New World Computing released a non-interactive game demo for their upcoming Might and Magic IV: Clouds of Xeen. While the demo showcased some of the basic features, there are several noteworthy differences from the demo to final release.

A completely different version of Jon Van Canegham's signature is used in the demo. The final game, as well as its sequel, uses a recolor of the screen used in the previous title. 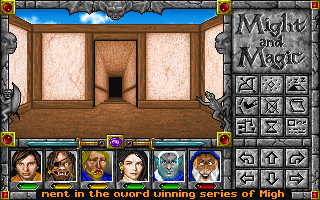 This doorway leading into a cellar didn't make it into the final game. In fact, none of the five main towns even have any "dungeons" within the cities, unlike the sequel.

All throughout the demo, except for when Crodo is documenting his plight (due to captioned text), the caption bar repeats this text.

In the demo, you see Crodo actually set his scroll down before opening it. In the final, he just opens it.

The global text font is shaded, much like the font from the previous game. The final game uses a solid-colored font. In addition, the final game uses a darker color for the text on Crodo's scroll. There are also captions on the cutscenes in the final, but the demo just skips over the scroll scene entirely, if the sound card isn't set to Sound Blaster or better.

The default party has three completely different party members, compared to the final game. Although, you can create your own party and those portraits are in the final, so it may just be a custom "demo" party.

It's hard to see in the screenshot, but the party is firing eight arrows, despite only having space for six party members. In the final, you can only have six archers, maximum (or seven, via hacking/hex editing). Since Clouds of Xeen was built using the Isles of Terra game engine, this could simply be a carry-over from the previous game's eight-member party system, or it may be that the final game was intended to have eight party members, as well.

After the demo finishes, it returns to Zardog's Tower (where Crodo is held captive) with the game's logo. In the final game, there's an actual title screen.

Within the Creative Labs VOC files of the demo are some lines for location guardians that didn't make it into the final game. While it's possible that they were placeholders for what the guardians would say in the final game, the wording seems to imply that the lines were recorded exclusively for the demo.

The guardian of the towers sounds completely different, in the final game. His voice is significantly less modulated and his voice is a bit more breathy. He's also a bit less chatty.

The demo's line sounds like a blatant sales pitch for the Might and Magic games. In the final, the dwarf sounds much more excited about the mines, themselves, his speech mimicking a chipmunk-sounding carnival barker advertising his attraction.

What sounds like a random, half-second laugh can be found under the filename of "EVILLAFF.VOC." This sound is never used in the demo, nor does it show up anywhere in the final game, so its intended use is a mystery.