This page details one or more prototype versions of Mortal Kombat 3 (Genesis). 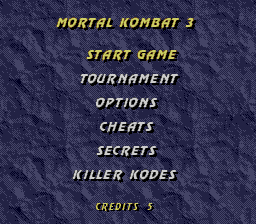 The header seems to be a placeholder and lacks the game's title.

At 0x0566A0. Comes complete with one of Midway's trademark cryptic nonsense:

The starting message is not only different from the final release's iconic MK3 tagline but almost seems like a counterpoint to it:

Also, from 0x04BD80 to 0x04DC30, along with the usual MK3 message are two other unused messages. The third one saw use in some trailers but not ingame.:

In this prototype, music slots 073-075 contain the Graveyard's BGM, which also plays during the credits sequence. The Graveyard was cut out of the Genesis version for space reasons Music:

Pausing the game does not stop the music in the prototype. Unused in release version.

Noob Saibot (id 11) has his own nametags, but uses the normal Kano palette rather thant eh all black Kano colors seen in the final game and most other versions of vanilla MK3.