This page details one or more prototype versions of Normality.

A number of playable prototype versions were released in the form of playable demos. All demos feature only Kent's apartment, the first area in the game. As soon as you work out how to leave, the demo restarts from the beginning. The apartment itself features a number of mostly small differences, and a bunch of things were polished up a bit for the retail release. Since the demo contains inaccessible content for the rest of the game as well, there's a fair bit of interesting content in here.

These demos were distributed in various sources, as well as online.

The build and adventure dates are found in the NORM.EXE files. The "adventure" date appears to refer to the content of the game as opposed to its programming code. Each build has its own version information string.

The content described in this article primarily relates to the oldest build, as newer builds simply become closer to the retail version without there being any noteworthy deviations.

Like the retail version, the NORM.EXE file has a number of command-line switches. It actually has a few more than the final version:

The later demo removes the /nomusic switch; the pre-retail demo additionally does away with /iglasses and /cheat, and finally the retail version removes /nocd.

In all builds, pressing V reveals a version string. The earliest demo has the following:

Graeme Ing is credited as the lead programmer for the game.

See Normality/Build Dates for a complete list of all version strings.

The "voodoo doll" control system was bigger and more prominent in the demo, showing more detail on the doll and also more of Kent's hand holding it.

Note the scaled-down final version has a few graphical glitches like broken pixel-lines, and the boot at the bottom is mostly cropped out.

All sprites of the demo doll: 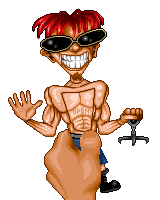 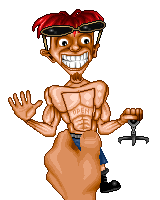 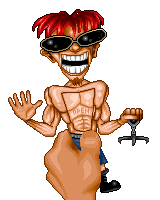 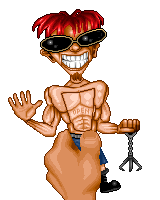 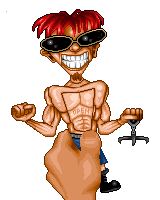 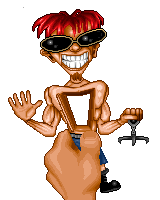 The prototype has a number of items that were removed from the final game, including a few in Kent's apartment itself.

Three items in Kent's apartment were removed in the final game: a Can of Food in the fridge, a Toolbox near the washing machine, and a Can of Yellow Paint on a nearby shelf. (The pool of spilled paint dripping down under the bucket remains, however.) Also, the Little Box appears high on top of the microwave, instead of down on the stovetop. 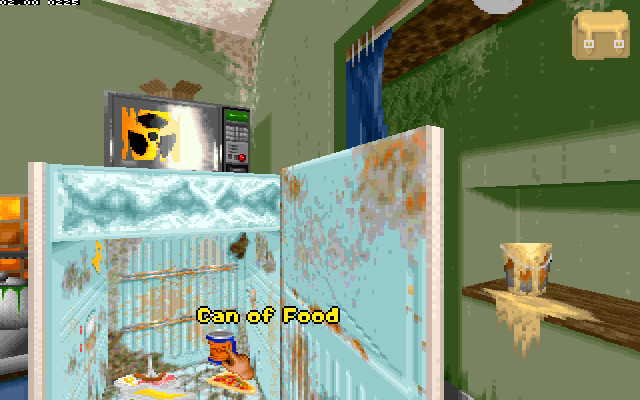 These two items are still present in the later demo, but get removed after that.

Kent's Toolbox, on the other hand, exists only in the earliest demo and nowhere else: 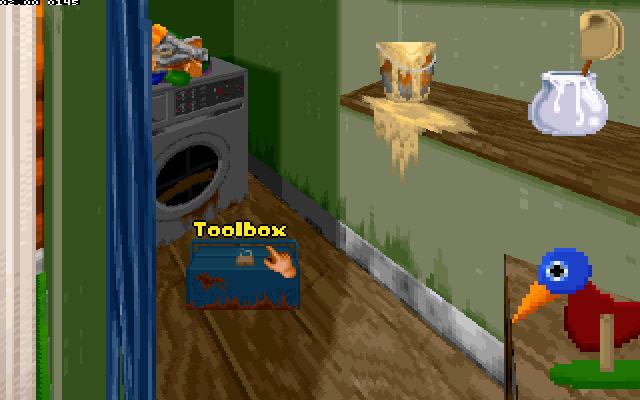 There are various minor changes to how items appear or are described. The t-shirt got a slightly altered inventory icon as well as an adjusted line.

The cardboard box was given a new sprite that fits better with it sitting on the stovetop as opposed to the microwave.

Kent makes a reference to a hotel in the demo version. Possibly removed because there isn't actually a hotel anywhere to find once you get outside.

The note you get in prison was written slightly differently in the demo version. The old line reading still exists in the retail version.

Interestingly, the US retail version of the game actually contains the old note text.

Finally, the Gizmo that you find in your couch has a totally different sound effect:

The demo only contains Kent's apartment as a playable area, but several other items are present in the game that never made it to the final version. These items are also alluded to in various unused pieces of text.

The sewer was going to contain a puzzle where you need to free a chained up alligator by picking a padlock. The alligator itself remains in the retail version, but the puzzle has been removed. However, the demo still contains the chain item and text lines related to it.

Also related to the sewer section is a set of welly boots that protect your feet from the cold water.

Finally, the mallet that you find in Heather's Den has a different inventory icon in the demo. You never actually get to find or use the mallet in the demo, though—the apartment is the only available location, after all.

It's not actually possible to free the rat in the washing machine in the demo—in the retail version, you can use the scissors to free it (even though the towel with frozen *FOOD* is the intended way), but that doesn't work in this version. However, the unused resources are still present and different to the final version:

Kent's line for taking it was also different:

The demo also contains a number of messages that seem to suggest Kent kills a rat in a trap:

There are no recorded voice lines for this and the messages are completely removed in the final version.

One last interesting detail is that Kent actually crouches down when approaching the washing machine, apparently to get a closer look at the rat.

This is somewhat glitchy and can be used to climb on top of the washing machine. In the retail version, Kent always stays at the same height.

When Kent tears the scissors away from the sticky floor, the discolored outline it leaves on the carpet is different.

The wall of a building outside Kent's apartment window has a different poster in the demo. It makes reference to another Gremlin Interactive game, Actua Soccer (a.k.a. V.R. Soccer '96 in the U.S.)

The pre-retail demo already has both of these textures set to their final versions.

The demo does not use the same music the final game does for Kent's apartment. Instead, it uses an early version of a track that was eventually used for the rebels' dumpster hideout.

The apartment's music track is named KENT.HMP, which ended up becoming XREBEL.HMP in the final version of the game.

The older version is a bit slower (135 bpm, versus the 160 bpm of retail) and it's not quite as fleshed out and polished as the final version.

There are a couple of music tracks which do not seem to be used in the demo version, and do not appear in the final game's files at all:

It's unclear where in the game these tracks would be used, although the name XSAUL implies it was intended for Saul in some way. The "X" is probably not significant, as half the tracks in the game have the same prefix (e.g. XFACTORY, XOUTPOST).

XSAUL sounds like a finished track. NORMUSIC is just over 1 minute in length, so it may have been intended for the demo's promo video which is just under 1 minute and a half.

The Norm who arrests Kent in the intro underwent a subtle but important change in the retail version: he smiles.

Kent is able to crouch and stretch up in the demo, by pressing the Delete and Insert keys respectively. This changes your vantage point to be slightly lower or higher. This was removed in the retail version, and in that your vantage point is a bit lower than the default of the demo.

Fully stretching out allows you to see that the ground outside is untextured. In the final version, the ground can't be seen at all. 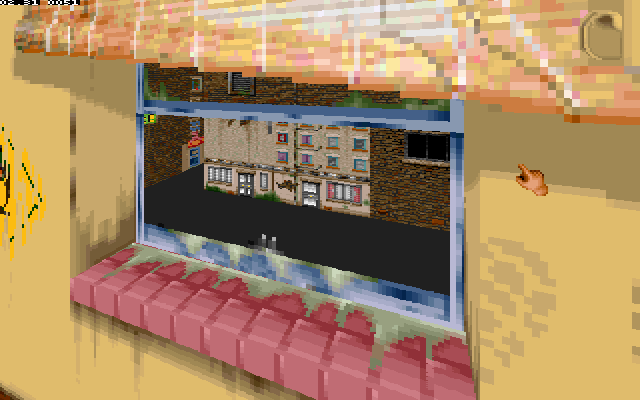 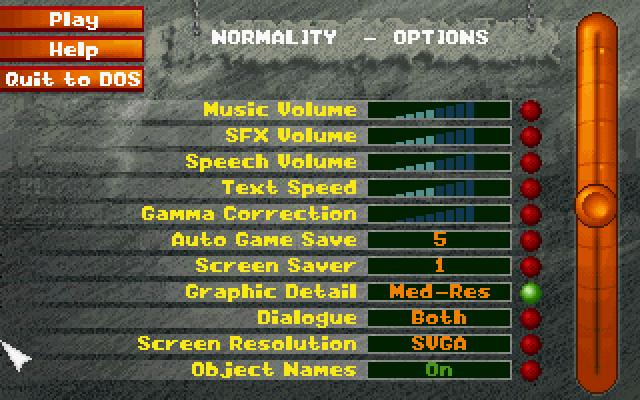 The text string for medium resolution is still present even in the retail version, although it was removed from the engine by the later demo.

The playable demo includes a short promotional video, extolling the game's design, "True-3D" engine, and use of motion capture technology.

Even though the demo only covers Kent's apartment, the data includes dialogue text for the entire game. A number of cut lines indicate that various ideas were once implemented and then cut in the final version—these are documented on the Normality/Unused_Text page in context.

The voice lines in the demo are identical to those of the final game, although only a part of the voice lines are included—the demo contains 1:30:18 worth of dialogue, most of it not audible in-game, while the retail version has 3:45:02 of it. Both voice files are stored as 8-bit, monaural 11025 khz raw PCM data.

The US demo additionally contains an end screen (in addition to showing the logo at the start) featuring a new render and order information. 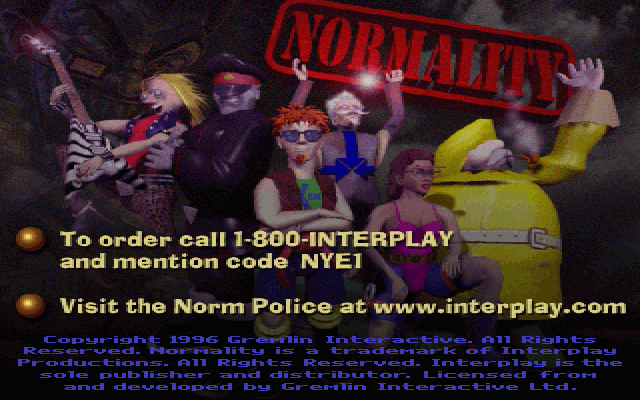 The demo comes with a READ.ME file that includes some references to things that ultimately ended up being changed.

The readme also refers to the NORMINC.BAT file needed to start the game—named after the old title, Normality Inc. It was replaced with NORMAL.BAT in the final version.

Besides the obvious difference in polish, there are a few extra bugs that hadn't been fixed yet: