This page details one or more prototype versions of Pipe Dream (Windows).

Differences from the Final Version

The prototype lacks a title screen and menu. It is also a lot more simplistic, with no level numbers or scores.

According to the credits, this version is based on Lucasfilm Games' Macintosh version. The help file documents preferences (including game types), levels, and scoring, but these don't seem to have been implemented yet. However, there is an unused dialogue box for preferences: 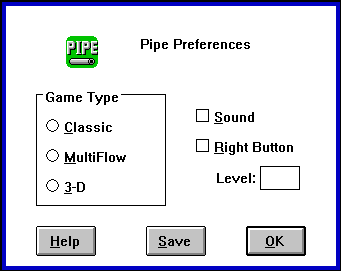 The prototype is copyright 1990 Duff Software. The final is credited to Wes Cherry.

The icon is also totally different to the final.

Present in the executable file's resources is a 'Generic icon' that doesn't appear to be used.